A Siberian boom against all the odds 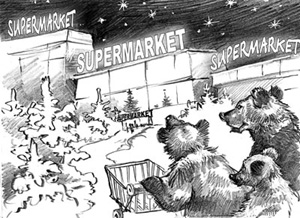 It was for a long time the mantra among top Moscow economists that building industries in Siberia and the Far East make no economic sense. It was a handy explanation of the financial woes of those enterprises and the movement of the population to the European part of Russia. But in the past three years Siberian cities have witnessed a construction boom.

In Omsk one square metre of new housing space costs 35,000 roubles, or 1,000 euros. So, that city alone will build 850m euros (or $1bn) worth of new housing. That is enough to accommodate a city of 60,000 people (more than 16,000 flats), and it costs about the same as the sunken Kursk nuclear submarine or two-thirds of the Northern Fleet's Pyotr Veliky aircraft carrier.

In 2006, Omsk built 780,000 square metres of housing and Novosibirsk just under 1,000,000 square metres. A quiet and little noticed housing revolution is under way in the Siberian cities and nobody is going to leave.

However, some companies did fail. And there is little sign that any new plants comparable to the Soviet-era giants will be built. Instead, Siberian cities are sprouting hypermarkets. Major retail chains such as IKEA, Lenta and Evropa have come here.

Businessmen, unlike theoretical economists, have a more sound assessment of the Siberian population's incomes and potential demand for goods and services. You only have to look at the roads, where the number of private cars has grown almost tenfold.

Transport in Siberian cities merits a special mention. Omsk, Novosibirsk, Krasnoyarsk and Irkutsk straddle big rivers, so there is a shortage of bridges and road interchanges. Traffic jams in Novosibirsk are at least as bad as in Moscow.

This year the Omsk authorities decided to rebuild the main city roads. As part of the preparation for the city's 300th anniversary the federal budget earmarked 1bn roubles ($40m) for the programme.

But the money was disbursed too late, at the end of summer. Still, the builders were so eager to use the money that they laid new asphalt in dry and rainy weather, and later even when it snowed. Watching the enthusiastic road builders, the local people placed bets on whether the new surface would last three years or would start crumbling after two.

It has become popular for cities to celebrate... jubilees, anniversaries, anything that comes to mind. And when a city celebrates, it certainly pushes the boat out. If Moscow, for instance, is preparing to host distinguished guests it will clean up and repair the streets, plant trees and fix street lamps.

In 2007, the Altai Territory was preparing to mark its 70th anniversary and welcome President Putin. A lot of repairs were made for everyone's benefit. Barnaul, formerly one of the shabbier Siberian capitals, has had a facelift. In place of a motor-building plant they opened a go-cart course, and in place of a textile factory, there is now a shopping centre.

At weekends a lot of young snowboarders head for the countryside. The prices in the cafes and restaurants are so high you could be forgiven for thinking that you were just outside Moscow.

All this would not be surprising except that according to statistics Altai is an economically depressed area, where the average wage is about $300.

The author Yevgeny Popov, who was born and raised in Krasnoyarsk, once told me that Siberians are as different from the residents of European Russia as Americans are from West Europeans.

I was reminded of this when I saw a monument in front of the local university. An open book stands on a pedestal, with one page filled with Russian and the other with Armenian characters. And the marble is engraved with the words: "For the 70th anniversary of the Altai Territory. From grateful Armenians. September 2007." Since people from that southern country came here and shelled out money for such a monument, it is a sure sign that life in Siberia will overturn many a grim forecast.

Pyotr Orekhovsky is a Professor at Omsk State University