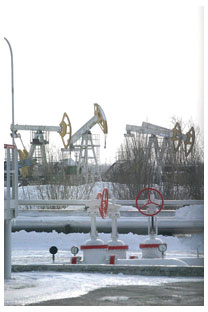 The new year was ushered in with oil prices crossing the psychologically important $100 a barrel mark on the New York Stock Exchange, culminating at $100.09 on January 3. Many wonder how much higher prices would rise, and whether this trend could lead to inflation and a global economic slowdown.

A number of economists have suggested that the approaching warmer months in the Northern Hemisphere will bring oil consumption, and therefore oil prices, down. However, the long-term outlook for automobile owners does not look good. Claudia Kemfert, energy expert at the DIW German Institute for Economic Research, recently told the Berliner Zeitung newspaper that scarcity in oil supplies would continue to push prices up. The institute concluded that the price of a barrel of oil would reach $150 in five years, and $200 in ten.

However, not everyone agrees. Andrei Yakovlev, pro-rector of the Higher School of Economics in Moscow, maintains that experts in developed countries tend to make overly pessimistic predictions. "Many Western analysts are interested in convincing their governments that the price of oil will rise because they want to see more investments into alternative energy sources," says Yakovlev. "In oil-exporting countries, such as Russia, the scientific community tends to forecast lower prices."
For now, many economists believe that oil is overvalued, and that prices are being held up by futures trading (e.g., investors buying up oil shares today to weather a potential crisis in the future). In part, this is the result of grim economic news coming from oil-producing parts of the world: Iran's recent skirmish with the U.S. Navy, port closures in Mexico and violence in Nigeria. In addition, the United States recently reported a drop in crude inventories. "The bottom line is: there is no deficit of oil," adds Yakovlev.

However, given that these fears are not likely to recede in the near future, oil prices will not suddenly drop. This will benefit emerging markets, whose governments are able to use revenues to boost consumption. Russia, whose economy was recently ranked 8th in the world in terms of size by the World Bank, is a classic example. Petrodollars have fueled a consumer boom which, according to various predictions, will turn Russia into the largest automobile market in Europe this year. The process is cyclical: growing emerging markets push oil prices even higher.

In Russia, the public is split between those who feel that the government is spending too much of its oil revenues on large-scale infrastructure projects and those who feel that not enough is being invested into the social sphere. In 2007, the government failed to meet its annual inflation target of 7.5%, with skyrocketing food prices bringing the figure to 12% by year's end.

"In my opinion, the government has acted wisely in regards to the surplus of petrodollars," comments Yakovlev. "In the 1990s, Russia had a very painful experience with poor budgetary planning and contradictory monetary and fiscal policies. Today, the state has learned to better shield itself from lobbyists in the State Duma [the national parliament]."

"There is enormous pressure to spend the windfall revenues on all sorts of ostentatious projects that have not been thought out very thoroughly. However, the Ministry of Finance has been resilient in channeling these monies into the national Stabilization Fund. Our reserves are now the third largest in the world," states Yakovlev. The Central Bank reported that reserves of hard currency recently topped $475 billion, with growing controversy over whether this money should be invested into foreign sovereign bonds with a high credit rating.

However, many Russians are concerned not with excess oil revenues, but with the consequences of a drop in oil prices. "Oil prices are difficult to predict, and therefore the government uses conservative estimates when drawing up the budget," explains Yakovlev. According to a recent report by the Moscow-based Institute for the Economy in Transition, revenues from oil and gas sales reached a new low of 8-10% of the federal budget in 2007, signaling increased diversification of the Russian economy. "For this reason, I'm optimistic about the future," says Yakovlev.