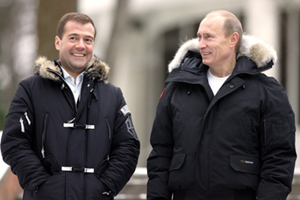 The next Russian president's approach to foreign policy is of critical importance because it will mark the end of the transitional period that began with the breakup of the Soviet Union. By 2012, Russia's future role in the world will become clear.

At the start of the new millennium, Moscow, despite all of the political and economic chaos of the previous years, remained one of the key forces in the geopolitical order. However, it was not strong enough to uphold its views and pursue its objectives. Using that foundation, Vladimir Putin set about implementing his own agenda. He sought to regain Russia's status as a superpower that has a say in global affairs. Overall, he succeeded. Today Russia is an important player in the world, whose opinion is carefully considered by other nations.

The next president will face a task no less challenging than Putin's. Russia, now back in the club of great powers, will have to determine its role and learn to parlay its abstract influence into tangible geopolitical and economic dividends. Both require major efforts on the part of the national leader.

During the last year of his presidency, Vladimir Putin rammed a hole in the West's polite indifference to Moscow's attempts at getting across its opinions on vital issues. But thereafter, a pause set in. While it has managed to break the indifference of its partners, Moscow has failed to present a clear-cut and consistent set of proposals. It therefore must rethink is foreign policy and determine its priorities, yet again.

First, Russia must move from exposing the imperfections of the world to proposing viable solutions to its problems. Nations professing a leading role in world politics are expected to have a strategic vision and display more than mere rhetorical brilliance. One current aspect of this problem is the debate over Kosovo. Russia must propose a solution to the seemingly frozen issue, rather than simply opposing the West's stance. The position of "interminable negotiations" is losing out because it lacks initiative.

Second, the mantra about a multi-polar world, which sounded fresh a couple of years ago, has lost its novelty. In fact, such incantations are even harmful for Russia because they divert the world's attention from analyzing strategic matters to insipid talk about Russia being "an independent power center."

A clear-cut system of principles, priorities, relations and alliances is particularly important for a multi-polar (and, by definition, less stable) world. And yet Russia, instead of building such a system, is still gloating over the failure of American attempts to dominate the global political arena. In five to seven years' time, Russia will face a far more pressing problem, namely, its inability to rival the political influence of the steadily growing Chinese tiger.

Third, the issue of exploiting new opportunities is acute. Vladimir Putin's style makes sense at the stage of national reassertion after a period of decline. But self-assertion cannot be an end in itself, especially because such behavior has a sobering effect on partners only at the initial stage. After a while they adapt to it, often benefitting from it themselves.

Russian bureaucrats who are engaged in international activities tend to be proud of their president's "intellectual superiority" over his foreign counterparts. Granted, Vladimir Putin stands head and shoulders above many of his interlocutors when it comes to the ability to answer impromptu questions in a substantive way.

However, it turns out that other heads of state do not necessarily have to remember the capacity of a gas pipeline, the technicalities of the work of pumps or the niceties of the investment legislation in this or that country. Their task is to promote their overall political position, which calls not so much for superior intellect as for a special flair that comes with political experience. In such cases, highly qualified and energetic bureaucrats enter the scene to advance the given policy in a competent way.

Russia's record on the latter count is far less impressive for a variety of reasons, including personnel selection and psychology. This forces the President to focus on superficial effects. The result is paradoxical: the Russian public is proud not of international solutions that are good for the country, but of the worsening of relations with foreign states, viewing them as a show of "strong character."

Russia's foreign policy priorities for the coming years must be the subject of a broad and competent debate because the price of incompetent analysis is too high. Furthermore, supplanting such analysis with propaganda - whether pro- or anti-government - is simply dangerous.

Fyodor Lukyanov is the editor-in-chief of the magazine Russia in Global Affairs.
Originally this article was published in the "Vedomosti" daily