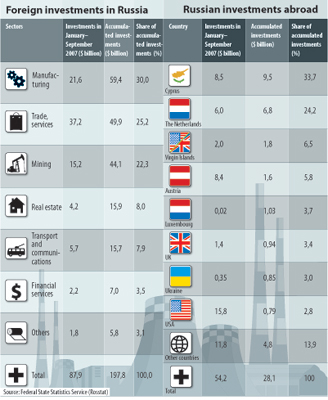 The state statistics service, Rosstat, has released data on foreign investment for January-September 2007. They demonstrate that the mutual exchange of investments between Russia and the rest of the world has grown by more than 50 percent from the previous year, a development that experts believe will be positive for long-term economic growth.

Foreigners have invested 150 percent more capital in Russia during January-September 2007 than in the same period in 2006. The bulk of these investments came in the form of loans.

Total investments in the reported period amounted to $87.94 billion, of which loans accounted for $57 billion, or 67 percent.

The majority of these loans were long-term, which is a strong indicator of continued foreign confidence in the Russian economy.

Foreign direct investment (FDI) in production almost doubled, reaching $19.6 billion, while loans accounted for approximately half of that sum ($9.75 billion).

Foreigners did not like investing in Russian securities or unit funds. However, portfolio investments grew by nearly 130 percent year-on-year, to $1.55 billion.

The bulk of investments, $37 billion, some of them in the form of trade loans, went into the rapidly expanding wholesale and retail trade sectors of the economy.

Investment in manufacturing reached $21.6 billion, showing foreign companies' interest not only in highly profitable sectors, such as mining (in which they invested more than $15 billion), but also in developing Russia's production capabilities.

The leading investors were Cyprus ($39.1 billion), the Netherlands ($36 billion), Luxembourg ($30.3 billion) and the UK ($24.2 billion). However, investments from those three countries came mainly from the offshore structures of Russian companies registered there (i.e., Russian money returning to Russia).

However, offshore investments remain substantial: $8.5 billion was invested in Cyprus and nearly $6 billion in the Netherlands during the first three quarters of 2007.