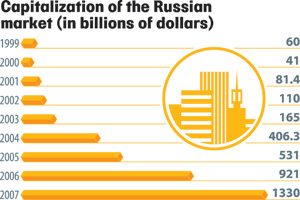 Dmitry Medvedev, the frontrunner for the Russian presidency, said at the economic forum in Krasnoyarsk, East Siberia, that the tax burden on business must be cut to allow transition to an innovation-driven economy.

His speech can be interpreted as an economic development programme for the next four years.

He said that if he became President in March he would proceed in four key directions, the so-called four Is - Institutions, Infrastructure, Innovation, Investment.

In the next four years Russia will:

The most important economic task is to cut taxes to ensure transition to an innovation-driven economy.

If the next President and government implement the programme, this will be a breakthrough in Russia's economic policy, marking the transition to a philosophy of economic growth.

The recent policy of financial stabilisation based on super-profits from commodity exports let the country repay foreign debts and accumulate huge reserves.

Taken together, this amounts to a cushion protecting the national economy from global financial crises.

Cutting taxes, as Medvedev proposes, should encourage businesses to increase investment in modernisation. In fact, Russian companies are doing this already.

"The government should collect only as much taxes as is needed to pay for its functions to maintain society and to stop business from fleeing to other countries, thus undermining the economy," Medvedev said.

He proposed a law on the deadline for the transition to a single lower VAT, echoing Putin's intention to introduce "a single and the lowest possible VAT". The candidate even proposed replacing VAT with a sales tax.

Medvedev said the profit tax should incorporate mechanisms encouraging spending on research and development. He also spoke about the financial markets and the banking system, not Russia's strong points. He said market openness exposed Russia to the dangers of crises and proposed measures to strengthen the financial and banking sectors so as to make the rouble a global reserve currency and Russia a new global financial centre.

Long-term refinancing institutes should be created for the banks, possibly with National Welfare Fund money, along with mechanisms for helping banks in times of crises, Medvedev said. He proposed improving the management of budgetary and foreign currency reserves, whose ultimate goal is to bring profits.

The First Deputy Prime Minister spoke of the need to modernise infrastructure, above all the roads. Roads mean "territorial freedom", he said, adding that a non-profit state joint-stock company should be set up to attract long money for road building and maintenance.

He wants the energy and telecommunications sectors to use cutting-edge technologies instead of obsolete ones.

Medvedev said he had been closely involved in social policy for two years and that the four priority national projects in infrastructure development, housing construction, healthcare and agriculture should aim to change the mentality of people, and the ideology of reform in education and healthcare.

"Investing in human capital is our duty," he said.

The candidate also said that the government should take care of cultural and spiritual values, which are being pushed back by the information onslaught.