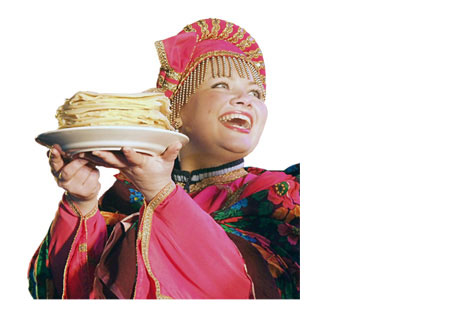 We call it Maslenitsa, the pagan Slavic holiday celebrating the end of winter and the start of spring. Its roots are deep in our culture and nothing can stop us enjoying it to the full. Or perhaps enjoying it too much.

In pre-Christian Russia, Maslenitsa was the happiest holiday, marking the beginning of work in the fields. Despite the church and the Soviet, it has survived.

Pancake week is celebrated across the country, especially in rural areas, with festivals, singing and dancing, troika rides, storming snow fortresses, and burning effigies of Lady Maslenitsa, who represents winter.

After Russia adopted Christianity in 988, the church tried but failed to suppress the pagan holiday, but eventually Maslenitsa was included in the Orthodox calendar as Cheesefare Week before Lent. The Soviet government also attempted to abolish Maslenitsa as a "bourgeois prejudice". Between 1917 and 1991, the holiday was banned, but was still celebrated in most Russian families, although not as widely and publicly as before the Bolshevik revolution or now in democratic Russia. Street carnivals and troika rides were not allowed, but plenty of good food was always present.

During Pancake week, Russians not only celebrate, but also eat their fill, in preparation for the long fast ahead. Traditional Russian pancakes are round, golden and warm, symbolising a spring sun since ancient times.

Throughout Pancake week, all Russians are happy, and full of hope and expectation. Pancake week ends with a truly Russian, deep and very touching rite - Forgiveness Sunday. On that day, all people ask one another's forgiveness for voluntary or involuntary offences that occurred during the past year. And, surprisingly, they give it readily and willingly.

Based on The Great Russian Linguistic Vocabulary information