Doing Business in Russia: is the game worth the candle? 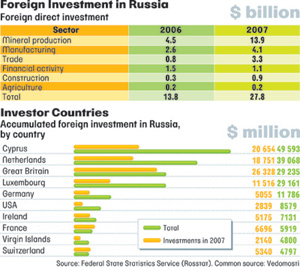 Over the last seven years most analysts consider that the Russian economy has been booming. Its bouncing dynamics are setting records, despite recently soaring prices. But when it comes to business - both Russian and international - entrepreneurial practices go beyond economic data, since they cannot always guarantee success. Taking into account the whole complexity of local market specificity - such as unevenly developing market sectors, regional growth, legislative and procedural pitfalls and others - reaping the fruits of the Russian economic bonanza is a big challenge for foreign operators. So, what does it take to start a business in Russia? And how far can it take you? Timur Beslangurov, Managing partner, VISTA Foreign Business Support, shares his views on the matter.

The Russian economy has been enjoying a period of sustained growth since the 1998 crisis. GDP in 2006 grew by an estimated 6.8%. The overall balance of trade continues to register healthy surpluses, as does the federal budget. The country's financial situation continues to improve, with a decline in sovereign debt levels and an increase in its sovereign credit ratings to investment grade achieved by all three major agencies.

The refund rate set by The Central Bank is decreasing steadily (10% currently). Russia's gold and foreign currency reserves are increasing and reached $400 billion as of November, 2007. According to economic forecasts, the middle class will constitute 50-55% of the population by 2010. Annual growth of consumption rate is 1.7-1.8%. Foreign direct investments grow by 25% annually.

Russian business enjoys a favorable tax regime: corporate income tax - 24%, unified social tax - 26-2% (regressive scale), personal income tax - 13%, VAT - 18%. And these are just a few facts. There are others: inflation is still very high at 11%; 40% of exports are still oil and gas; Russia remains in a transition period and is facing many economic problems. Among factors which foreign investors highlight is a highly bureaucratised business environment and high dependence on business from government regulatory agencies. Whilst laws are relatively good, there is poor enforcement practice, and the courts are perceived as not being independent.

Russia is a big consumer market and currently there is tremendous growth in areas such as automotive, consumer products, construction and real estate, telecommunications, financial and banking spheres. In most of these sectors foreign investors are very active and without a doubt create very strong companies; sometimes market leaders.

Every Russian city with a population over 500,000 is a target for Russian and international retail chains. Shopping is becoming a planned family programme for the weekend. A new industry was created in the last five years: family shopping. The new Russian consumer is diversified and products for all areas are in great demand. Many businesses are proving successful due to the highly diverse range of products and services they sell or provide. There is huge potential for products for the growing middle class. Producers of luxury products are benefiting in Russia much more than in any other country in the world because of non-market reasons which come from the Soviet era of supposed equality and the resulting unnatural eagerness of people to become rich.

Russia is experiencing a construction and real estate boom. Hundreds of construction companies (including international companies) are working in Russia on thousands of projects. All sectors are developing: office construction, industrial and of course residential. Apartment prices in 2005 and 2006 rose by 100%. In 2007 however, the market showed much more stability.

It is worth mentioning that there are still many sectors of the economy where there is place for competition and that is the main advantage for many foreign businesses which have the knowledge, technology and know-how.

The growth of any country starts from its capital and Russia is no exception. Moscow is the biggest and most developed city in Russia. It is also bigger in terms of investment, population and economy than any Russian region. But now more and more Russian cities are developing and are very attractive places to conduct business, for Russian and foreign companies alike. There are several reasons for that: Moscow became too small for big businesses, with fewer opportunities; and growth can be sustained only by expanding and multiplying a well-established and well-run business model into the regions. Consumer power is also dramatically growing in the regions.

There is also the political factor. Several years ago the Russian President changed the established order of elections for the Governors and Presidents of the Russian regions and created a system by which the President of Russia appoints Governors and Presidents of the Russian regions. This was a major factor prompting tremendous growth in regional business. Previously Regional Governors and Presidents bothered little about the economic growth of their region because in Russia it has never been necessary for politicians to answer to the people who elected them. With the new system, key performance indicators needed to be complied with in order to be appointed by the President for the next term: economic growth, social stability and political loyalty.

The number of Russian regions which have created Investment Promotional Agencies, or have organised or plan to organise regional investment or economic forums is increasing every year. The Regions finally have started to fight for investors by providing a variety of schemes to make business conditions as accessible as possible. Such schemes include regional presentations of projects and web sites in foreign languages; many Russian regions participate in international exhibitions (MIPIM, Singapore Economic Forum, etc) where they present different investment projects. Among the regions developing fastest are St. Petersburg, Samara, Kazan, Nizhny Novgorod, Krasnodar (Sochi), Sakhalin and Rostov.

Benefits and Challenges for Foreigners to Start Business in Russia

A key benefit for a foreign company starting business in Russia is the continuing growth in almost all sectors of the economy (although some sectors are no longer as attractive as they were several years ago). Foreign companies are also in a good position to benefit greatly from the relative lack of competition in some sectors of the Russian economy. Another factor which puts foreign companies in a more beneficial position is the cost of money which for most Russian companies is higher than for foreign ones. Experience and knowledge of the development of markets which foreign companies already have due to working in other counties give them a huge advantage in prognosis and strategy development.

Administrative barriers present challenges to business in Russia. Many foreign businessmen, when confronted by something which is an established procedure ask: "Why is it so hard, inconvenient, illogical, anti-business? Why is there so much paperwork? Why can't it be done more simply, as in the rest of the world?"

There are two answers to these questions: firstly, Russia has more government officials than in just about any other country; and secondly, Russian logic is different! For example, it is common practice to repair roads in Russia in winter when it is snowing!

Among other problems, there is the abuse of law by government agencies, especially for the registration of business. Unfortunately, in many cases it is easier, less trouble and faster to do what a certain official asks you to do rather than to go to court and defend your rights. The most unpleasant factor in such a situation is that your business suffers because of the whim of a certain official, and there is no fast way to prove that you are right.

One of the most common challenges for 99% of foreign businessmen is expectations of expense and time: frequently for Russia both have to be doubled. There are so many factors that influence the time factor that foreseeing possible problems can be difficult even for experienced business consultants.

As was mentioned above, a Limited Liability Company or Private Joint Stock Company can be founded by any individual (Russian or foreign) or by a legal entity. The founding document of a Sole ownership company is a Charter. Such a company does not require any management bodies such as a General Meeting of the Founders. There is no Board of Directors. All the decisions are made by the sole founder. Accordingly the legislative requirements on the calling of general meetings and other procedural issues are not applicable to such a company. Management of the company is by written instructions by the founder. But such a company is a separate legal entity; its assets are legally isolated from the assets of the founder.

Procedural Peculiarities: How to Avoid Difficulties from the Start

The Russian Government has tried to simplify the procedure of starting a business in Russia as much as possible, although it is far from being as simple as registering a company in, for example, the UK or US. There are certain practical peculiarities which it is worth highlighting:
Do not purchase an off-the-shelf company. You may save time at the start, but you will face many problems in the near future. Most of these are of a technical nature: changing the general director, shareholder, or address, which may prevent you from using your company to the full.

Another big difficulty is that tax authority officials (tax authority is a company registration authority in Russia) usually follow the rules of their internal instructions which frequently go against the law, especially immigration law. As of January 2007 it is possible for a foreign national to notify officials about where they are staying, either their place of residency or place of work, in person at the local immigration office or by post. The tax authorities, though, often illegally ask for supporting documents with the application to register a company. Accordingly, if in the application a foreign national states that he is a Moscow resident and in the migration notification there is the company address, the tax authorities will not accept the documents and will require a different immigration notification in person at the local immigration office and a declaration of the place of residence, not the work address.

The number of such small ambiguities is enormous and unfortunately tax officials do not always take into consideration existing laws when making their recommendations on how to fill out the application. The only way to make the process as easy and transparent as it is in the UK, for example, is to go to court and seek clarification (see www.ukcorporator.co.uk).