How our farmlands could fill the global food basket 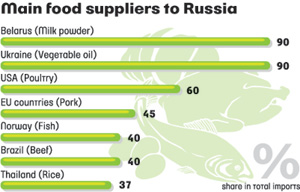 "Love comes and goes but you can't go without food." This saying, which was bandied around in 1970s Russia, is taking on new relevance as world food prices escalate and the planet slides towards a food crisis. Cocoa beans in Africa, beef in Europe and rice in China have all seen significant and sustained price increases, but the most alarming situation is in the grain market, where wheat prices in Chicago recently reached $12 per bushel.

Historically, Russia was an agrarian country and one of the biggest producers and exporters of food. But then the United States, too, was once an agricultural economy. New York's famous Broadway was originally a cattle trail, and Wall Street got its name from the wall built to protect the residents from pigs foraging for food in the surrounding meadows.

To be self-sufficient in food, a country must produce a tonne of grain per capita. Russia produces little over half that and is far behind the top five grain producers (Argentina, Australia, the EU, Canada and the US). Moreover, Russia may soon face the problem of rising import food prices, particularly meat and milk, as a result of the growing grain prices.

For its part, the Kremlin hopes that problems in the world's agricultural markets may give a boost to domestic agricultural production. Indeed, Russia has huge agricultural resources, including 10pc of the world's plough lands and 50pc of its black soil. But the average crop yields in the country are far below world standards: 18.9 centners (1 centner or quintal being equivalent to 100 kg) of grain per hectare, 130 centners of potatoes and 179 centners of vegetables per hectare.

Many farms in the provinces are loss-making and are kept open only because they perform a "social function", providing jobs and some kind of livelihood for the local population. In recent years areas under crop shrank by some 20m hectares (77,250 sq miles; some estimates put the figure at twice that amount) because they have stopped being cultivated and have become overgrown with weeds.

The Russian agriculture minister, Alexei Gordeyev, nonetheless claims that "land will be brought back into cultivation within three to four years and we will have crop yields of more than 100m tonnes".

According to the UN Food and Agriculture Organisation, in 2007 the world's stocks of grain, especially wheat, dropped to the lowest level in 25 years.

At the same time the Economist food index, published since 1845, showed prices hitting an all-time high. The forecast is prompted by a change in people's consumer habits.

The combination of rising living standards and fast-growing populations, especially in places such as China and India, is driving up demand and changing eating habits. People in China and India are no longer content to live on rice, and are moving towards a Western diet rich in meat. The result is a worldwide paradox: food prices tend to soar in the years of large, rather than poor, harvests.

In this context, food production may indeed become even more profitable than the oil and gas business, especially if one considers George W Bush's ambitious programme to see the United States producing a quarter of its fuel from non-hydrocarbon raw materials within 10 years. The Europeans are also embarking on an equally ambitious project to bring the use of biofuel to 10pc by 2020. This will put further stress on food production, as arable land is turned over to fuel crops.

Russia has vast land resources suitable for that and other business. The more far-sighted investors have wised up to the coming "bonanza". Domestic and even foreign businessmen have been quietly buying up arable land in Russia "just in case".

Facts and figures on production


Russia produces 532 kg of grain per capita, the same as the EU. But the European Union feeds its half a billion people by applying effective farming technologies (crop yields are at 4.9 tonnes per hectare), and Russia reaches the same result with crop yields 2.5 times lower for a population three times smaller.

For the first time, food shortages became a topic of discussion at the World Economic Forum in Davos. The key risks facing the world, according to the "Global Risks 2008" report, are a systemic financial crisis and rising prices of food and energy.

Experts in Davos rated the probability of food shortage in poor countries in 2008 at three points on a five-point scale. The main reasons are growing population, rising living standards, production of biofuel and climate change.

Over the past 15 years, more than 18,000 rural communities have disappeared from the map of Russia. The average wages of farmers are one third of those of city residents. One in every three young people in rural areas is out of work. Only 6pc of college and university graduates return to work in the rural areas.

So far the growing production of biofuel has pushed up grain prices mainly for psychological reasons.

Last year's world harvest was 1.5bn tonnes, of which only 106m tonnes was used to produce bioethanol. But the very prospect of oil being replaced with biofuel has not been lost on investors.