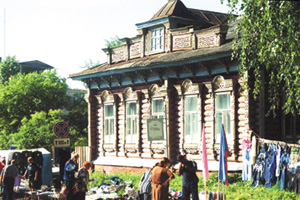 Once upon a time a Russian prince resting on the bank of the Volga was awakened by a mice running over his face. The prince's rage subsided when he saw a snake ready to bite him. The mice had saved his life. The grateful prince ordered that a chapel be built on the site. Years later a town was built around the chapel, and was called Myshkin - town of the mouse.

Most tourists arrive at Myshkin (about 175 miles from Moscow) by river.

Every half hour a ferry takes people and cars across the Volga to this quiet and beautiful small town and its population of a little more than 6,000. Its buildings boast balconies and there are colonnades that bring to mind St Petersburg.

The boats stop in Myshkin long enough for the tourists to buy mice souvenirs and have a snack in a riverside café, where the prices are as high as they are in Moscow.

If you have enough time, you can walk to the ferry stop, where an old house with a canteen famous throughout the town stands. There you can enjoy fresh steamed meatballs and rice for less than 50 roubles (£1.1), and a bottle of Yaroslavl beer for 15 roubles (£0.3).

The Mouse Museum, the only one of its kind in the world, houses a unique Mouse Kingdom display, with hundreds of mice figures made of different materials from many countries. Guides will tell you the legend of the mice who saved the prince, and show you famous cartoon mice, book-lover mice, romantic mice and traveller mice who flock to Myshkin.

You can admire iron galoshes from the 1920s in the local lore museum, and explore ancient buildings, including a traditional peasant house, a banya, a smithy and a windmill, at the ethnographic museum. You can watch potters and smiths working in local shops, and they will even allow you to make a pot or a horseshoe.

If your feet are feeling the cold, you can head to the Valenki Museum, where you can choose from a staggering selection of warm and environmentally-friendly felt boots.

Highlights include embroidered valenki with rhinestones, valenki in the form of a horse or dog, the valenki locomotive, the valenki aeroplane with a felt mouse pilot wearing valenki, felt football shoes, a cactus valenki, a vase and Santa Claus valenki.

Next to the Valenki Museum stands the Flax Museum, covering the history and traditions of Russian flax growing and linen making.

The Vodka Museum is also known as the Museum of Pyotr Smirnoff, the most famous and successful of Myshkin's sons and the "father" of the world famous Smirnoff vodka.

Exhibits include shtof and shkalik vodka bottles, and many other vessels for keeping and drinking vodka, dating from the 19th century. Vodka tasting is an additional attraction.

You can stay at the Hotel Koshkin Dom (Kitty House) with the Mousetrap Restaurant, a park with wooden arbours and a large pond on which you can skate in winter, the summer hotel Myshinoye Podvorye (Mouse Inn), and the Hotel Zolotoi Bor (Golden Pine), at 3,850 roubles (£80) a night. A new hotel, being built near the pier, is due to open in July 2008.