A new social contract Is his best way forward 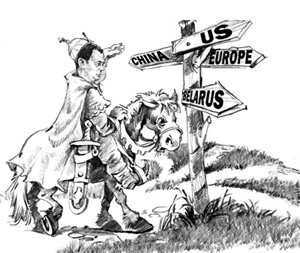 How we all long for a democratic President, one who believes in liberal values, understands the mental torment of intellectuals, appreciates free thought and does not crack down on the opposition. Someone who does everything according to the law and not to the designs of Kremlin spin doctors. How anxiously we look for some sign of hope for a better future. We start digging in Dmitry Medvedev's biography, scrutinising his track record, his speeches and the people around him, to find justification for our optimism.

But we should not deceive ourselves - neither education, nor his social circle, nor the professional experience of the new leader - nothing in Medvedev's background provides any clues as to what kind of President he will be.

Think of Vladimir Putin as a member of the "Sobchak team" in the turbulent 1990s and Putin 10 years later. [Anatoly Sobchak was a prominent liberal politician during the Yeltsin era.] A political leader is forced to change his views, leanings and even principles in order to stay in power; those are the rules of the game, and it is not within Medvedev's power to change those rules.

Let us suppose that the Kremlin decides not to change anything. After all, this arrangement has worked for eight years, and pretty well too from the government's point of view.

It is not viable. The system of bureaucratic capitalism created by Putin and his team has all but exhausted its potential. Even if oil prices remain high, the Russian economy will slow down. Even if half of the ministers and governors are replaced, the government will remain dismally ineffective. Even if tens of billions of dollars are funnelled into the creation of state corporations, Russia will still be a long way from a knowledge-based economy. In this case, the new President will be but a pale shadow of his predecessor, blamed for failing to "build on Putin's success" and for not making good use of the power he was given.

Paradoxical though it may sound, the only chance for the new President is to rely on the institutions of civil society. It is not a matter of principle, but of political survival. Medvedev has experience in implementing the so-called "national projects" concentrating resources on improving agriculture, education, housing and health care, and he ought to know how bad the state is at disposing of these resources. In fact, the national projects are no longer projects at all: they are just channels for pumping more money into the country's antiquated social fabric. Without a strategic partnership with civil society, the government's social investments will continue to be nothing more than handouts to a disgruntled populace and an extra incentive for officials to become more corrupt.

Medvedev knows the basis of a modern economy is human capital, not raw materials. The quality of human capital, in turn, is determined by the quality of social policy. Whatever social sphere in Russia you look at - education, health care, social security, housing, utilities - government programmes are stymied because society is still treated as an object, rather than the subject, of actions.

Meanwhile, non-governmental organisations could even now assume a wider spectrum of functions, from monitoring the state's initiatives, public scrutiny and preparation of alternative social projects to participation in public auctions and doing social work on the ground.