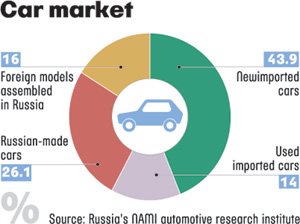 Car giant Renault-Nissan has bought a 25pc stake in AvtoVAZ, the strategic carmaker that has dominated the Russian motor industry for nearly 50 years, for $1.2bn.

The government believes the deal, the final step in building a trilateral alliance, will make Renault-Nissan-AvtoVAZ the world's third largest carmaker after Toyota and General Motors (GM), able to produce up to seven million cars a year.

Russia will continue producing Ladas, the main AvtoVAZ brand, on the platform of Renault's Logan.

AvtoVAZ wanted a foreign partner to streamline and modernise its operation. It considered Fiat and GM, and planned to produce S Class Ladas with the Canadian concern Magna before opting for Renault.

1. The number of cars in Moscow per capita is now as high as in New York. The proportion
produced in Russia is also increasing, as leading international manufacturers look to open local factories in ever greater numbers.

4. The Russian car-parts market is estimated at $32.7bn (end of 2007 figures). Analysts predict that this will grow by at least 20-25pc annually over the next few years.