Two captains on the Kremlin cruise 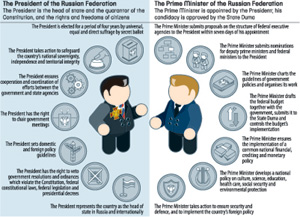 It was the question which had been generating countless speculation, and even some jokes. Will Putin follow recent prime ministerial tradition and hang a portrait of President Medvedev in his office?

During his recent press conference, President Putin ended long-running speculation by revealing that he would not, in fact, follow tradition and order a portrait of the President for his office. Some commentators believed that Putin - who currently makes do with a portrait of Russian reformer Tsar Peter the Great - might have gone for the option of having Medvedev wear Peter's costume and regalia.

All of which led Russians to concentrate on another point: how Medvedev and Putin actually share power after the inauguration in May.

It is the subject of something like a national debate. Political scientists and experts can be seen discussing the issue in newspapers and on television; the intellectuals of Moscow and St Petersburg debate it in their kitchens; and ordinary workers can be heard arguing over it on construction sites and in factory smoking rooms.

The predictions naturally range wide. Some speak about Russia heading for a destabilising period of dual power. Others of a swift return of Putin.

In their public speeches, however, Putin and Medvedev have repeatedly stressed their commitment to a strategic plan for the country's development, which in turn calls for joint and focused efforts of the authorities and society.

Indeed, on one level, the very idea of a power struggle seems unlikely. Both men are obviously from the same team, sharing the same convictions. As such, there can be no serious grounds for discord between them. Moreover, even without these circumstances, the Russian constitution protects against such conflicts by clearly and unambiguously delimiting the powers of the President and the Prime Minister (see right).

For two trained lawyers - one of whom refused to run for a third presidential term against the advice of others; the other who made legality a centrepiece of his election campaign - this would seem to offer a strong enough guarantee.