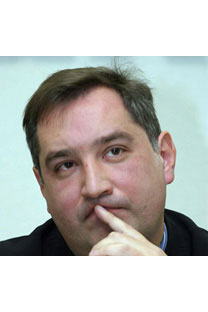 With relations between Russia and Nato at a particularly low ebb, this April's Nato-Russia Council in Bucharest has taken on particular significance. Ahead of the summit, Russia's ambassador to Nato Dmitry Rogozin spoke to RBTH to explain his country's approach to the major debates and tension points in global security.

Though Vladimir Putin has agreed to take part in the Nato-Russia summit, the background for dialogue is not particularly favourable: Kosovo's declaration of independence from Serbia, America's negotiations with Poland and the Czech Republic on the deployment of a missile defence shield (ABM), and speculation within Nato about the possible admission of Ukraine and Georgia...

I know that Putin is confident in the weight of Russia's arguments on these issues, and so is going to express his view at the Russia-Nato meeting. There will be discussions on key security issues, which will include the problem of the US third global ABM area in Europe - ie what are the targets of American radar and missile interceptors? And the repercussions of Kosovo's declaration of independence will still be felt when the summit starts.

How will the ABM problem affect Russia's cooperation with Nato? Are all members of the alliance unanimous about this deployment?

Members of the alliance are hoping that this will be settled in the framework of US-Russian cooperation. Russia's position is clear: it wants one of two options. Either a joint theatre ABM system in Europe, based on American, European and Russian R&D, providing a security umbrella over the whole of Europe; or guarantees that by its very design the US system cannot threaten our interests, even potentially. We have not yet received a substantial answer from the US.

We can understand why our American partners feel unable to make reasonable decisions on the ABM issue, at least not before the forthcoming presidential elections. But I'm amazed at the European position. The US ABM area in Europe will pose a direct threat to them. Damage from nuclear warheads exploded over Europe would be hundreds of times worse than that of the Chernobyl disaster.

Do you think Nato countries will develop a membership action plan for Ukraine and Georgia? Will this take place at the summit in Bucharest? Or is it likely that Nato limit itself to what it calls "intensified dialogue"?

Everything depends on how rational decision-makers are. For the time being, Georgia and Ukraine are below Nato's standards for candidature. Inviting them to the alliance would destabilise the internal political situation in both and lead to a degradation of their statehood.

If Georgia joins Nato, it will have to accept the loss of a considerable part of its territory, particularly after the precedent set by Kosovo. Neither Abkhazia nor South Ossetia - which have both unilaterally proclaimed their independence from Georgia - is going to join Nato.

After all, Mr Saakashvili cannot join Nato in a personal capacity, can he? But there is a risk that Georgia could enter the alliance following a referendum.

Ukrainian society is strongly divided on Nato membership. Furthermore, the division between supporters and opponents is primarily geographic, which may threaten Ukraine's statehood. I'm sure these facts are well known in Nato. I don't think there are any hotheads in the alliance who would like a major destabilisation in Europe.

How will Russia respond to Nato expansion?

We do not understand why the alliance is expanding, and so Russia will certainly react to the admission of Croatia, Macedonia and Albania. On the other hand, this expansion does not directly affect our national interests.

Russia-Nato relations have been strained because of Kosovo. How does this affect Russia-Nato joint programmes?

These joint programmes are not of a strictly military character. Some of them are devoted to general problems such as cooperation in the aftermath of emergencies and natural disasters, and countering drug trafficking and terrorism, to name but a few.

There is no doubt that our cooperation with Nato on these levels will continue to develop. As German Foreign Minister Frank-Walter Steinmeier said - and with good reason - there can be no security in Europe without Russia. Russia is a powerful factor in world politics, and it cannot be ignored.

If European Union countries agree on a unified approach and Nato crosses the boundaries of its UN mandate, the two organisations will clash with the United Nations in a collision that will involve not only Russia-Nato relations but the entire global security system, and not only diplomacy but big politics for years ahead. Is fair play possible between countries or is might right? Which option will the world choose?

There will always be all kinds of conflicts and clashes of opinion. What matters here is whether we can overcome these conflicts politically, or will we slide down the slope to confrontation. I favour political methods.

What does Russia expect from the Nato summit in Bucharest?

We expect a very serious dialogue. We are hoping that Nato will explain its current policy. I'm certain that Russia will raise the issues of Kosovo, the Treaty on Conventional Armed Forces in Europe (CFE), and the American ABM system in Europe.

Russia has accepted its invitation to the Nato summit despite Kosovo's recognition, differences on the ABM shield and many other issues. Regardless of all this, President Putin has decided to go to Bucharest.

We consider it very important to be able to explain Russia's position on the most urgent issues face-to-face. We are hoping for a serious and detailed discussion of all the problems of global security.

Born in 1963 into the family of a famous Soviet military historian, Dmitry Rogozin graduated from Moscow State University in 1986 with a degree in journalism and later completed a PhD in philosophy.

In 1993, Rogozin joined the Congress of the Russian Communities, a nationalist political organisation created to promote the rights of ethnic Russians living in the former Soviet Union. In 1997, he was elected to the State Duma as a deputy from Voronezh city and became noted in the years after for speaking out about the fate of ethnic Russians in former Soviet Union republics.

Rogozin is widely known in Russia as the former leader of the nationalist-patriotic party Motherland, which won 9.2pc of the vote in the 2003 parliamentary elections.

In January 2008, Rogozin was appointed Russian representative to Nato.

It was initially unclear whether outgoing President Vladimir Putin would be accepting an invitation to attend the Nato-Russia Council, due in Bucharest in early April 2008. According to his foreign minister, however, Putin's decision to do so "once again testifies the country's commitment to dialogue on all international issues".

In reality, relations between Russia and Nato during the Putin presidency have been far from easy.

On the one hand, things started brightly some nine years ago, when Moscow declared itself ready and willing to cooperate with the alliance on international issues. Since then, the differences between the two sides have only deepened.

Most especially, Nato's continued eastward expansion, deployment of bases in Bulgaria and Romania, and speculation about the admission of Georgia and Ukraine have stoked Russian suspicions about the alliance's true intentions.

Contacts were further strained when the United States declared its intention to deploy elements of a missile defence shield in Eastern Europe.

Meanwhile, the recent unilateral declaration of independence in Kosovo has served to exacerbate existing tensions.