Big boys are pushing out the street traders

Business
RBTH
This article was prepared by «RBCC Bulletin» 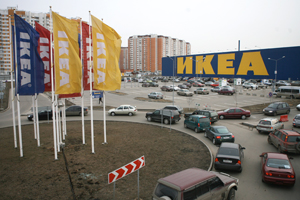 Many market analysts predict that retail chains will merge in response to the threat posed by the arrival in Russia of major Western retail chains such as Walmart and Tesco.

Analysts predict that within a few years, three to five retail chains will control around 80pc of the St Petersburg retail market. Experts say the outlook is good for Russian companies as they are growing just as fast as those Western counterparts already on the Russian market.

Chris Skirrow, partner and director of services for companies in the retail and consumer goods sectors at PricewaterhouseCoopers, compared the situation on the Russian retail market to the other Bric countries - Brazil, India and China.

Russia is in a good situation and retail sector growth is one of the main factors in its economic diversification today.

Russia's five biggest retail companies accounted for 5pc of total retail sales in 2006, which is somewhat higher than in India and China, and a lot lower than in Brazil (36.5pc). The five leading companies on the Russian retail market are Metro, Eldorado, Magnit, X5 Retail Group and Evroset.

Heads of leading companies shared their vision of the sector's development prospects, speaking about staff turnover in the sector and the difficulties in finding qualified personnel due to Russia's population decline, rapid market expansion and the new technology that has made it harder for the older generation to gain an equal footing on the job market.

Michael Caves, of Boots Retail International, said that for his company, which sells its products on the Russian market through the 36.6 chain, teaching his staff about the product line is the most important area of work. Nick Peel, general director of IKEA Dybenko, said the company has had trouble keeping up with rapid wage growth and keeping hold of highly-qualified staff.

Unlike in other Bric countries, in Russia families spend a greater share of their income on average on food, which makes the foodstuffs retail segment particularly attractive. This segment of the market has reached a figure of $144bn.

Mikhail Urzhumtsev, general director of Melon Fashion Group, said that the women's clothing market, the segment his company works in, has now reached a figure of around $12bn and that annual growth has stabilised at around 15pc.

Nearly all the big players are present on the Russian market now and competition is growing. The challenge is intensifying and the battle to increase market share and develop a civilised retail environment has become fiercer. The days of trading conducted in the streets are over and the retail market has taken on a more modern look. -