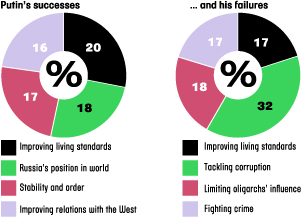 One month before the official end of Vladimir Putin's presidency, leading Russian pollsters Levada Centre carried out a survey of public opinion. Their aim was to reach some conclusions about the results of his eight years in office.

One of the most important findings was the importance respondents placed in economic stability. The survey revealed that as many as 57pc of Russians believe that such stability was "good for Russia", even if this meant renouncing democratic and market reforms. Only 11pc disagreed with the statement.

The most frequently mentioned failing was Putin's inability to remove a culture of corruption and bribery (32pc), the continued political influence of rich moguls (18pc) and growing crime (17pc). Fifty-three pc of respondents believed that the gap between the rich and the poor has widened under Putin, with 27pc considering that the gap is more or less the same as under Boris Yeltsin.

Unsurprisingly, 70pc welcomed Putin's policy of raising living standards, while as many as 55pc said they would like to see him run for the presidency again.

Putin would also appear to be fortunate in holding a position of supreme power without a corresponding level of responsibility. According to Boris Dubin, head of Levada Centre's political research department, Putin is rarely blamed for the ills or mistakes of his government, which therefore do not bring down his approval rating. "The media created such a terrible image of the 1990s," he said, "that for most people Putin's stability is reason enough to give him the benefit of the doubt."

The image Russians have formed of Vladimir Putin during his two presidential terms is itself somewhat contradictory.

On the one hand his high personal popularity ratings run against the accepted truth that people eventually tire of even their most popular leaders. Over the first four years of his presidency, Putin enjoyed approval ratings of between 60pc and 70pc. By mid-2005, this had settled at 65pc, but then moved up to reach a record high last year of 87pc, dropping below 80pc only once in April.

A more detailed analysis of poll data, however, reveals some curious anomalies. For example, many of those who had high hopes of Putin, and were apparently left disappointed, still approved of his overall record. Similarly, a comparison of Putin's approval rating with the results of a poll on his economic and political policies reveals that at least half of those who approve of Putin would like to see "some adjustments" to his course.

These contradictions are even more stark in polls that refrain from mentioning Putin at all, but instead ask respondents to assess their own economic position. For example, in October 2007 a Levada Centre poll reported that the number of Russians who had problems with buying food and clothes was 40pc. Yet 84pc of respondents in that same month expressed firm approval in Putin's presidency. In other words, more than half of those who live in poverty did not associate their problems with presidential policy. -