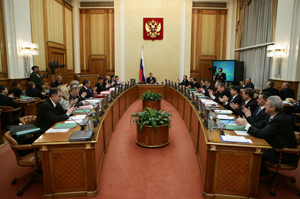 The global crisis is certain to affect the Russian economy - it is already spurring inflation and depleting liquidity in the country.

But perhaps just as significantly, it is also affecting internal government politics, with the Cabinet almost split in two by discussions on economic priorities.

One group, connected with the Finance Ministry and the Central Bank, believes that fighting inflation must be the priority and insists the GDP growth rate should be sacrificed in this struggle.

The prime proponent of this is Finance Minister Alexei Kudrin. He argues that the Russian economy is seriously overheated. "Intensive capitalisation in certain sectors will create bubbles," he argued recently.

Kudrin believes the current level of inflation prevents Russia from competing with other countries' rates of lending. As a result, Russian companies and lending organisations prefer to borrow abroad.

The other group, consolidated around the Ministry for Economic Development and Trade, believes the main problem in the Russian economy is the shortage of credit resources, which could stall current GDP growth rates. Supporters of this group are convinced it will be very difficult to reactivate growth mechanisms after the crisis.

Representatives of the industrial and banking lobby are similarly concerned about the liquidity crisis and a dramatic decline in the possibilities of borrowing abroad. Loans have become too expensive, they argue, reminding detractors that at least 2pc of Russia's 6.6pc GDP growth was secured by loans.

Looking at the problem of inflation reveals additional complications.

One of the two main reasons for the increases in price indices is the continuing large contributions to the budget made by mining companies.

The inflationary pressure of such payments is somewhat eased by the stockpiling of gold and foreign currency reserves which, by early March, amounted to $502bn. But it remains nonetheless.

It is not too difficult to note that these two sources of inflation are also the main drivers of economic growth and Russia's positive trade balance.

Another potential problem is the need for government to continue to maintain high levels of foreign investment. For this, it will need to support economic diversification, which in turn will entail major investment in infrastructure.

The government faces a dilemma: spending on infrastructure will spur inflation in the short term. But in the longer term it will strengthen the economy's resistance to inflation by increasing labour productivity and enhancing the economy's growth potential.

Russia has no end of potential obstacles to economic growth a shortage of generating capacities, roads and railways.

Kudrin's view that the Russian economy was overheated is probably based on his doubt that the government can act effectively enough to balance between the Scylla of inflation and the Charybdis of major investment in production.

Kudrin also doubts that now is the right moment for such investment, because the ongoing global crisis is increasing uncertainty and risks. And finally, he is not sure the government will opt for investing through market, rather than state, institutes.

These debates will most likely continue until May 8, when the Russian parliament is to approve the nomination of Vladimir Putin as Prime Minister.

The new government is likely to offer a formula which takes both sides' arguments into account, but it is unlikely to question the priority of GDP growth. After all, global crises can not only wreak havoc, but also present new possibilities to those willing to put their head above the parapet. -