Mikhail Gorbachev: an optimist with a warning for the world 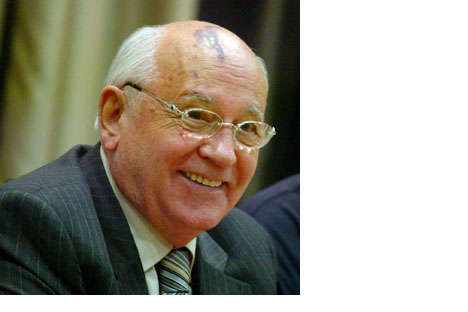 In a world overloaded with problems, you want to find signs of hope. Perhaps one such sign is the way the international political agenda has recently been picking up both pace and substance

A few events stand out here. One is the recent French-British summit at which President Sarkozy and Prime Minister Brown discussed long overdue proposals for reforming major international institutions. Another is the meeting of Presidents Putin and Bush in Sochi in what appears to be a final effort to ensure their legacy on vital security issues. A third and crucial development is the decisions on new Nato and EU memberships.

Everyone seems to agree that some degree of global governance is essential to overcome global chaos. The question is, who will be in charge?

The contenders have made their bids. The US was involved in hectic efforts to drag Ukraine into Nato (although more than half of Ukrainians adamantly oppose the move), with Bush ultimately unsuccessful in pressing reluctant European partners to take Ukraine and another former Soviet republic, Georgia, into their fold.

In Iraq, we have seen the bitter fruits of US actions, and the limits of using force to solve complex international issues.

Another contender for global leadership, the G8, lacks the international legitimacy that would give it real authority to address the world's common concerns.

A "league of democracies", as proposed by several US presidential hopefuls, would be even less credible. Who would select those worthy of membership, and what would the eligibility criteria be? This organisation, it would appear, would also supplant the United Nations. Yet the fact that it would exclude China and Russia, as one candidate, Senator John McCain, suggested recently, is surely enough to make it a non-starter.

Such an initiative is not only ludicrous but dangerous: a world that has just escaped from a global confrontation would again be torn asunder, divided into "good guys" and "bad guys". My country would be among the latter, as if it were a rogue state. Russia, which did more than any other nation to end the Cold War, is now being accused by politicians and media in the West of "revanchism"; of nuclear and energy blackmail; and of attempts to subordinate its neighbours.

The real situation in relations between Russia and other countries, including its neighbours, is quite different from this sad picture. There are a few points we can make here. First, the past few months have brought a marked change for the better after years of bickering with Poland and Latvia. Second, Russia and Ukraine are finally coming to terms on difficult energy issues. Third, things have also recently got off the ground with Georgia, where the resumption of direct air links might act as a prelude to more general reconciliation.

The common interests of Russia and its neighbours are too important to sacrifice to ambition, intrigue or the painful legacy of the past. Thankfully, some policy-makers are beginning to recognize this and act accordingly.

Still, there are those who oppose this positive trend. Among American politicians, more than a few seem to endorse Zbigniew Brzezinski's maxim that the bigger the divide between Russia and Ukraine, the better it is for democracy. Personally, I was hard pressed to see even an inkling of democracy in the efforts to push Ukraine into Nato. Even though members of the US Senate should have other things on their minds, they seem to insist on playing geopolitical games that have nothing to do with responsible international politics or with the real challenges facing the rapidly globalising world.

Recently I took part in a conference in Turin - a meeting of the World Political Forum, of which I am the president, and the Club of Rome, a leading international think tank.

After discussing the most heated areas of international politics, we came to the conclusion that many events had been predicted by some of the world's leading thinkers, though their recommendations went unheeded. Here, much of the blame goes to the Cold War, but even its end has not brought the expected dividend. And the resurgent arms race is the clearest sign that the stranglehold of the past has not been broken.

We do not have another 40 years to come to grips with the real, crucial issues mankind faces - the challenges of security, poverty and environmental crisis. However, with political priorities as skewed as they are, there is today little chance that resources will be used for the common good.

The title of the recent book by the Nobel Laureate Joseph Stiglitz says it all: The Three Trillion Dollar War: The True Cost of the Iraq Conflict.

According to some estimates, this figure is comparable to the cost of World War I and even World War II. And this at a time when about 1bn people live on less than $1 a day.

I remain an optimist. I still believe that common sense will prevail. I know that the media - awakened with global responsibility - is capable of glasnost on a world scale. And I have seen how politicians can be real statesmen.

Together we can shape better policies for a better 21st century.