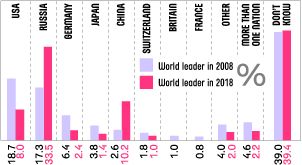 Two polls published in march provided a picture of russia in the world. one showed that a majority consider their country firmly in the driving seat of world politics; another indicated russia's reputation around the world is belatedly improving.
Russians believe their country is already a leading world power and are more confident in their country's future, according to a poll taken before the Nato-Russia summit.

The poll, commissioned by Bashirova & Partners, reported that Russians believe that 10 years from now Russia will have overtaken the US in world influence, and together with China will form a new axis of power. The B&P survey canvassed 500 adults in six Russian Federation cities.

Meanwhile, a BBC World Service poll revealed that Russians' growing self-confidence is matched by an improved reputation of the country abroad. This survey, which canvassed 17,500 people from 34 countries, reported that 37pc saw Russia as positive influence in the world, with 33pc thinking otherwise. This compares to 2005's figures of 35pc and 40pc respectively. Despite recent problems, the number of Britons who view Russia positively reached 45pc, while 69pc of Chinese were positive about Russia.