Why we are right to fear Nato 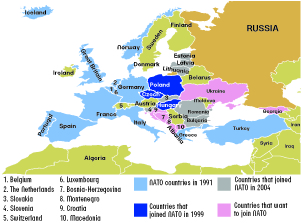 When Soviet leader Mikhail Gorbachev voluntarily renounced his empire's buffer zone, agreed to Germany's re-unification and disbanded the Warsaw Pact in 1989, he received verbal assurances from the Western leaders that Nato would not expand in the East. Today, against the word and spirit of this agreement, Nato is already bordering on Russia and reaching out to Ukraine and Georgia.

It is important to remember that back at the very end of the 1980s Russia wanted to secede from the USSR no less than any of the Baltic countries or Georgia (and probably a lot more than Ukraine). Additionally, the independence of other Soviet republics was a direct consequence of Russia's own striving for sovereignty. All of which makes the new states' subsequent transfer of phobias and grievances from the Soviet Union to Russia seem slightly unfair.

Nato's own willingness to encourage this approach revived in Russia a high-level of mistrust of the West - a mistrust that had largely disappeared in the late 1980s and early 1990s. This atmosphere of suspicion was aggravated by Nato's intervention in Yugoslavia, when the humanitarian-focused alliance bombed civilian facilities in Belgrade, a European capital. And then, this year, by the fact that many Nato members recognised the division of Serbia and Kosovo in clear contravention of international law.

It is precisely this context which sets the tone for Russia's current attitude toward Nato.

Of course, not every aspect of Nato-Russia relations is negative. On the one hand, Russia's political and military leaders are not so conceited as to view Nato as a military enemy. Indeed, the forces are incomparable. Nato's military budget surpassed $800bn last year and is likely to reach $900bn this year. Russia's defence budget stands at $35bn (or $40bn if you were to include its contribution to the Collective Security Treaty Organisation). Moreover, it is widely understood that sophisticated decision-making procedures will not allow Nato to launch a surprise attack.

On the other hand, there are areas of clear agreement. For example, Moscow has always approved of Nato's role in Afghanistan, where it is essentially protecting Russian interests.

The place where Russia sees problems is Nato's tendency to ignore Russia's legitimate interests. For example, the organisation is increasingly substituting for the UN, where Russia has always enjoyed considerable influence. Moscow is also highly concerned by Nato's expansion as it believes it threatens Europe's unity. Key EU countries such as France and Germany want to see Russia in Europe, but Nato's expansion is an obstacle to this.

The issue of Kosovo has the same roots. Russia feels humiliated because it has always protected Yugoslavia, and later Serbia. It views this move as an attempt by the United States to draw Europe into the realms of the unpredictable, before then deserting it to face the probable consequences alone.

Russia is also concerned about Nato setting up military bases in Bulgaria and Romania. The bases are obviously not designed for large-scale aggression, but they do provide a convenient infrastructure for moving troops closer to Russia.

But all of these concerns, worrying though they are, fade into insignificance next to the question of Ukraine's candidacy for Nato.

It is our view that Ukraine's Nato entry would completely sever relations between Kiev and Moscow, with far-reaching consequences for which more than half the Ukrainian population is not prepared.

So what would happen? First, membership would lead to a real, secure and protected border, and the introduction of visas. In other words, it would cut off an important artery for the many Russians and Ukrainians who have family, business and other connections in the other country. The situation is particularly precarious for the Crimea, where though the territory is Ukrainian, the overwhelming majority of people are pro-Russian.

Second, Ukrainian and Russian industry would also suffer greatly, most especially the many large defence plants that trade almost exclusively with Russia. Russia itself still remains heavily dependent on Ukraine, especially for its defence needs. Ukrainians still perform the maintenance of Russia's most powerful SS-18 "Satan" missiles. Gas turbine engines for Russian warships are still produced exclusively in Ukraine. All Russia's helicopters have Ukrainian engines. There is extremely significant collaboration in the field of aircraft manufacture.

Third, there are logistical questions with regard to the Russian navy's use of Black Sea ports. Russia would be forced to withdraw its entire Black Sea fleet from the Crimea, because a Nato member country is not allowed to have bases of non-members on its territory. The Black Sea would thus turn into Nato's inland lake, with serious security implications for Russia.

It is also vital Nato supporters understand that around half of Ukrainians are Russian speaking, and deeply opposed to membership of Nato. It is not impossible to imagine that Ukraine's admission to Nato would cause massive internal divisions that could ultimately split the country. The idea that Russia might have to intervene in a civil war against its will does not please its leaders.

Time cures all, but Russia's mistrust of the West continues to accumulate. And it is a product of post-Soviet concerns, rather than simply Cold War heritage. -