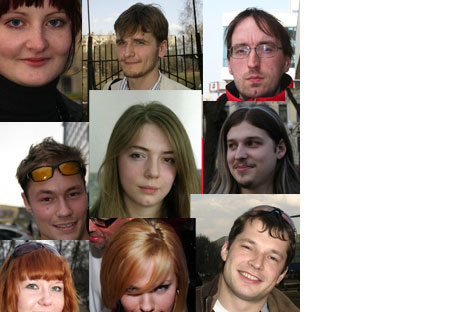 Everything here depends on the individual
What's life like for a young actor in Russia? Well, the competition is fierce. When I enrolled for stage school, there were about 300 people for each place. Even now you can go to a casting, queue for three hours and they'll finish before they get to you. They'll say "thanks for coming" and that's that. "Bye."
All the same, a young actor can earn a decent enough wage, and this is improving with every year. Someone starting out, for example, will get $150-$200 for a day of filming. You start negotiating as you get more experience. Though you've got to hurry to get in ahead of someone else. You see, everything in Russia depends on the individual, on how much he actually wants things himself.
Actually, I think actors are a bit like Russians in general - there is no golden medium in their character or mentality. They only function in extremes. They either break walls with their bare hands or they turn away and pretend the same wall doesn't exist.

It's no longer absurd for us to have an academic career
I'm from a small town far from Moscow. My parents moved here 10 years ago so that my brother and I could get an education. Things were much more difficult then - I had to work during university to help my parents cope financially. But we're all standing on our feet now. My brother even has his own consulting company.
As for me, I see my future in academia, as an expert in my field. And that means teaching too, because a degree without some teaching experience is worth nothing. I don't think I'll be staying in one country to do this. But it's no longer so absurd to have an academic career in Russia - for the first time in decades they have started paying teachers real wages.
Overall, though I don't agree with much of what the current regime stands for, they have to be praised for getting us out of the chaos of the 1990s. Of course, you can criticise Putin for tightening the screws. But then again bringing order always requires some screws to be tightened.

I'm interested in buying a car - not politics
You ask me why I'm still studying at 26? I'm getting on, sure, but I lost a lot of time while I was serving in the army. And I need it if I'm going to be successful with my freight business.
As far as I'm concerned, success in life is about being one's own boss. It's about stability. Confidence. Family. And... well... I'd say its easier these days to have all four. Definitely compared to the 1990s. You can buy anything you need now. Apart from a flat - you can work day in, day out, and you still won't have enough. I've heard the government are offering grants, but I'm not really at that stage yet. I've only just got together with a girl, you see. I'm hoping something serious will come of it.
Are our politicians changing things for the better? I can't really answer that. There is progress on some fronts. Life is changing. But politics don't interest me. I'm more occupied with other things, like buying a car. I'll definitely do it this year, though I haven't decided which one yet.

With kids, your problems will increase. But I'm optimistic
How are things with money? Not easy. I'm always looking for the next rouble. But I don't complain - if I need something, I'll always find a way of getting it. It's something I've learned in life - if you give yourself a goal and a deadline, you'll do things. Of course, you'll sometimes hit a brick wall, like Russian bureaucracy, but even this is getting easier. Not so long ago we even came across a helpful government official.
What's the biggest problem facing young families? Housing. We've been thinking of moving from Moscow to St Petersburg for this reason. Two years ago we managed to get credit to buy a two-bed apartment there. We're paying 12pc annual interest on $65,000 [£33,000], but we were lucky as the exchange rate has since moved in our favour.
We've got relatives and friends who have moved abroad, but we want to stay and work in Russia. I know when my children start to grow up, my problems will increase. I know I can't be entirely confident about the next 10 years. But I'm optimistic when I look to the future.

Classical music will never be profitable, but that's OK by me
I'm in my final year at the Moscow Conservatory, though I'm also a sometime concert pianist. Many students are already well established musicians and travel the world with their music. I haven't given that many concerts, but then again it would be stupid to complain as they are much better than me. In any case, I think my future will more likely be in organising music than giving concerts. I've been running one annual festival in my home town for three years now and it's been growing like a crescendo.
Are classical musicians in demand these days? Sure they are, but you still need to rely on finance from sponsors. Classical music will never be profitable, and that's OK with me.
Politics are important to me. My sympathies lie on the side of liberal democracy, but the problem is that this have never had any sensible proponents in Russia. I didn't vote out of principle, but the way things stand, I think I would probably have voted for Medvedev. He seemed to me the lesser evil.

My identity is in being Russian and Orthodox
What are my plans in life? First thing is to finish college, then I suppose to find work. For me, the most important thing in a job is that it is creative, but I know these jobs are hard to find.
I'd describe myself as a Orthodox patriot. I was born in the Russian Far East. I feel Russian. The Orthodox religion is really important for me. We're trying to observe Lent at the moment, though we aren't always that successful.
Am I interested in politics? Not really. I don't watch news on the TV. I try not to watch TV at all. But I voted in the elections. For Medvedev. Why? I like Putin's politics, and I think Medvedev will continue in the same way. It is thanks to Putin that Russia is on the up.
I think Russia is right to take a hard line abroad. You have to remember Russia takes up one sixth of the entire globe! The most important thing is that we avoid a war. I believe all people are brothers. Do I think a war is possible? Maybe. I think the US present a real danger with their politics.

Being involved in public politics is like a drug
How did it start? I've been actively involved in politics since my second year at university, but it was only in late 2004 when things really got interesting. This was when I founded a site - skazhi.net ["say.net", "net" also being the Russian word for "no" RBTH].
My idea was a response to an unpopular government decision to replace social benefits-in-kind with direct payments. We saw that people were upset, wanted to protest, but didn't know where or how.
So we decided to create a dynamic online map of Russia, with updates of all the protests going on around Russia. We ended up getting loads of coverage in the foreign media, including CNN.
As for me, I had great fun growing my beard and wearing a cap I wanted to play on the image of Che Guevara. I think that people quite liked it.
When the wave subsided, I left the public arena to work for a political party.
To be honest, I miss it loads. The exposure gave me a high... it was like a drug.

I don't believe we are on a collision course with the West
I have exams coming up, so my only thoughts are on this. The first year is always difficult. All your energies are focused on work and there's very little time for anything else. I'm taking a law course, English, French and a load of other supplementary courses. It's a real slog, believe me.
Would I have taken part in the elections had I been 18? I think it would have probably been worth it. To be honest, I don't feel any particular need or desire to vote.
Do I consider myself European? That's a difficult one. I suppose I consider myself Russian first and foremost. Probably, yes, we are closer to Europe. Moscow at least. It is a completely different world in the eastern regions.
Today, everyone is talking about a clash of the West with Russia. I'm not sure about this. I've travelled a lot and I think that people generally respond to Russians well. The only exception to this is the Czechs, who for historical reasons really don't like us.