Being Siberian is about wearing your hat right 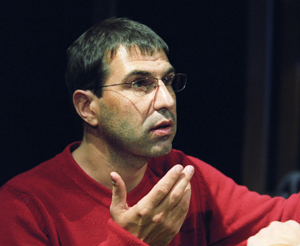 No matter how hard American actors try to play Russians in the movies, they can never quite get it. Most of the time Russia is shown as completely snowbound. And if there's snow, it's got to be winter, which means it's got to be cold. And if it's cold, that means the characters have to be dressed up to suit. And how best to depict a Russian in winter? Well, in a fur hat with earflaps of course.

The trouble is that even if you hire the best consultants, buy a genuine cap and travel to Russia to shoot the movie, no American will ever manage to wear that cap with the earflaps the true way it should be worn.

On an American head it will always be the wrong size or the wrong colour, it will always look out of place. The American will never be able to wear that fur cap with the casual simplicity of a true Siberian. And most importantly, he will never feel its absolute necessity in the same way as we do...

I used to have a good friend in my home town whose father was African. The father came to Novosibirsk as a student and met a beautiful Russian woman who was studying French. My friend was the happy result.

With his dark skin and general appearance, his African connections were quite clear. But I never attached any importance to any of that. We went to schools that were close to each other, we played games together and all the rest. He was simply one of us, the same as we were. And he wore his fur cap properly.

There were no blacks in our town. In fact he was probably the only dark-skinned person there. But he was definitely Siberian.

Later I travelled with my parents to Moscow one winter and came across a group of African students. I thought: "Ah, that's what real blacks look like." They were dressed in ludicrously light coats and wrapped up in striped scarves, and they had bright-coloured woolly hats with pompoms stuck on their heads. They were walking along the street, photographing everything they saw. I told that friend of mine about them later.

"You know, they were dressed up like clowns," I laughed. "Why weren't they freezing in clothes like that?"

"Yeah, well," my friend drawled, "when they catch cold, they'll get the idea."

With his scruffy astrakhan cap (with earflaps) and battered felt boots, in my mind he had nothing to do with those dark-skinned foreigners I saw on that Moscow street. When we met again during my student years, he told me that he'd served his time in the army near Lake Baikal - to the east beyond Baikal in fact. "One Sunday in winter," he said with a smile, "we started playing in the snow outside the camp.

"The weather was good, so they'd let us out of the camp to visit the town, and as we were walking along we just started throwing snowballs at each other. It was so beautiful, in the middle of the forest, with all that fresh snow and sunshine and a long walk to get to the town. And such a little town, too. Can you imagine it? Way out past Baikal. The back of beyond.

"Suddenly this military vehicle, a jeep, appeared, and we all started dusting the snow off ourselves. And a jeep meant senior officers. When it stopped, a general in a Cossack hat stuck his head out and called me over to him.

"I ran up and saluted: `Comrade General, private so and so, reporting as ordered.' As I said it, I could sense the general had a hangover, and he was already drunk again. He took a good look at me, crossed himself in wild fashion and drove off without saying a word..."