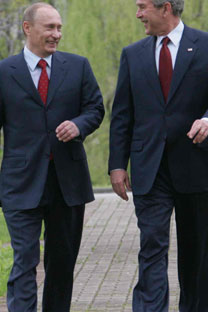 At their final meeting in Sochi, Vladimir Putin and George Bush found an elegant way of finalizing their far-from-simple relations. Publishing a "declaration on strategic frameworks," they promised to work together on key problems, but refrained from binding either party to do so.

On the one hand, Presidents Bush and Putin have drawn a line under the conflicts and squabbles of the recent years. On the other, they passed on a difficult legacy to their successors, with which the new presidents will soon have to contend. But at present, the symbolic finale of the Putin-Bush relationship may be a happy one. As for the content of the agenda, the results are much more modest.

The new century has brought with it a change in world politics. New forces have unexpectedly emerged onto the international arena - the economic force of Asia, developing much faster than expected, and the new threat of Islamic extremism. Following Iraq, the U.S. has begun to understand the limits of its power. International institutions that were so strong in previous eras are fading in significance, and no new ones have emerged to replace them. Under these circumstances, there was little chance the two countries could build long-term relations. Today, Washington and Moscow face completely different tasks. The United States is the only country with a global horizon and interests all over the world. Russia, on the other hand, is an emergent power, attempting to expand its influence in global politics and economics. For the U.S., Russia is but an element of a very intricate global picture, a country to take into account but not obsess over. For Russia, the U.S. is an all-embracing factor, exerting influence on Russia's entire policy environment. In other words, U.S.-Russia relations are asymmetrical by definition.

Moscow is seeking equal cooperation, which is unrealistic. Washington is hoping for Russia's subordination, which is also implausible - Russia is too big and recovers too quickly to settle for such a position.

The legacy they pass on to their successors does not rule out future confrontation. Despite the relaxed tone of both sides, there are serious contradictions on very major issues: the deployment of a U.S. missile defense system and NATO expansion toward Russia's borders.

Armed conflict has also reappeared on the international political horizon. Military spending is growing everywhere except in the European Union.

Any change in the strategic balance, especially in the context of arms buildup, creates strong anxiety and mutual mistrust. Negotiators should recall Cold War times - agreements were achieved with great difficulty, but once signed, they were strictly observed. It would be naïve to talk today about the need for military-strategic parity. But militarization is a very tricky phenomenon, and the United States has realized that military technologies are not enough to guarantee leadership, even in a single country like Iraq.

In the future, Russian and American leaders will have to seek a fine balance of international, rather than bilateral, interests. America has more of those interests than Russia, but traditional bargaining is impossible. The process of globalization will only further facilitate this. The two sides should analyze global problems together, and in time, this will help the two countries settle their differences. -