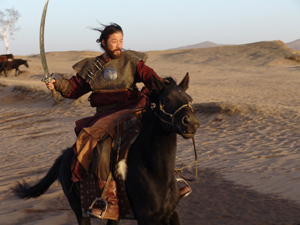 Sergei Bodrov's "Mongol" won in six categories: Best Film, Best Director, Best Cinematography, Best Sound, Best Production Design, and Best Costumes.
With its relaxed atmosphere and lack of dress code, the Nika is known as the most egalitarian of Russian movie award ceremonies (this year's ceremony was even more casual without the usual red carpet). Predictions for the best film started a month before the event. This year's other winners included "12," a remake of "Twelve Angry Men," which won the Golden Eagle Award, while the White Elephant Critics' Award went to "Cargo 200," a film that surprised audiences with its frank depiction of the fall of the Soviet Union. -

Sergei Bodrov, director:
"This wasn't an easy movie to make. The Nika is a professional award, and it was wonderful to receive it from colleagues. The ceremony brought together the best directors, actors and artists. It was inspiring!"