Day of Entrepreneurship introduced in Russia 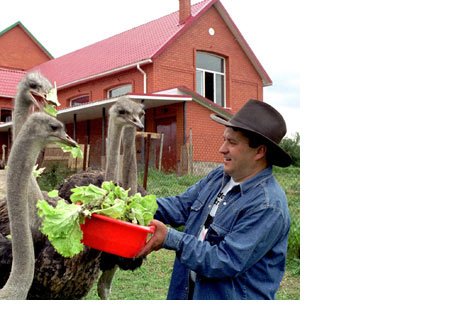 A new professional holiday was celebrated for the first time in Russia on May 26 - the Day of Russian Entrepreneurship. Soon Russian small and middle size business is going to have a new piece of legislation making its life much easier.
One of the first decrees President Dmitry Medvedev signed first week in office had a touch of drama. It was called - "On urgent measures to eradicate bureaucratic barriers to entrepreneurship activity". This decree was in fact a direction to the government to prepare an emergency legislation to eliminate all red tape currently choking small and middle size business in Russia.
It is hard to find the best way to start presidency. At least for the reason that small and middle size business in Russia employs a quarter of all labor force. But at the same time it has been facing a monstrous set of bureaucratic obstacles. To eradicate them was one of Dmitry Medvedev's key election promises. Now that promise is delivered. New legislation to follow presidential decree will make happy some 17 million people busy in small and middle size business. Let me remind you that according to Russian legislation a small business shall employ up to 100 people and a number of mid-size business employees should range from 100 to 250 people.
This presidential decree was perfectly timed to the first celebration of the new professional holiday introduced last year - the Day of Russian Entrepreneurship. This day was marked by Moscow based Forum of the Small and Medium Business in Russia.
So by this decree president Medvedev befriended millions involved in the small and middle size businesses as well as potential entrepreneurs.
But why small and middle size business is such a problem in Russia?
Small business was initiated under disguise of cooperative movement during late 80's under Mikhail Gorbachev and then was legalized in early 90's under Boris Yeltsin. Small business was growing mostly like a native grass. Self reliant and not state protected small business turned into unfenced pasture place for criminals and bureaucracy, being rated by general public with a grain of salt as weeds of capitalism, so to say. The Yeltsin administration was positive about this wild weed but paid mostly lip service. Big guys were too busy frying big fish, cannibalizing huge lumps of former Soviet economy. Vladimir Putin was fast to realize huge social and economic potentials of small business as well as it poor shape. In 2001 he called situation with regard to small business "distressing". "If nothing is changed in this sector - Putin said seven years ago - the potential for developing small business should be regarded as exhausted. Entrepreneurs will be either closing down their businesses or slip into the shadow economy". Situation was that of emergency. Small and medium-sized companies, especially in provinces, were harassed by mafia and bureaucrats. Most survivors accumulated in Moscow and failed to flourish. Situation with small business got stagnant. Analysts estimated that small businesses in Russia accounts for 13 to 15% of the country's GDP, while in many Western countries this figure stands at 50 to 70%.
Putin realized only too well that small business makes a breeding ground for a middle class Russia needs badly. His ambition by 2020 was to have 60 to 70% of population involved in small business which should generate no less then half of GDP. This high flying plan demanded a comprehensive and consistent state policy. But government had no political will so far to deliver such a policy. In Russia top bureaucrats need a strong push from the president to start moving. This push was given by president Medvedev in coordination with Prime Minister Putin. To turn small business from a blend of wild grasses to a cultivated and productive cereals the government need to protect these plants, fertilize and water them. To protect from bribe hungry sharks of local bureaucracy. To fertilize and water by allowing available, low interest credits and by benevolent taxation. Now Russia has a financial potential to do this. But what most important there is a strong top level political will to stop talking and start acting.
Turning small businesses into a crucial engine of Russian economy is not a one day campaign. To issue legislation protecting small business from despotism of bureaucracy is the easier part of great design. Decades of negligence, bureaucratic outrage against the background of an old Soviet time stereotypes made many Russians unmotivated in starting a business of their own. According to polls only 5% of Russians were interested in setting up their own business. I understand them only too well. In mid 90's I was a partner in a small technology transfer business. But after a year of being harassed by local mafia, protection money hungry police and by tax authorities we decided to quit it cold. Now I'll be watching with some hope a changing landscape with a crazy idea to try my luck once again. In a year from now I'll raise this small business topic again. God bless you with your business!