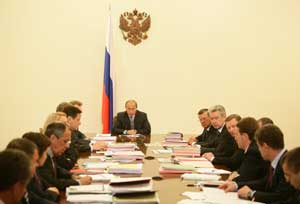 This was primarily due to its structure and the number of former members of Putin's administration who got new jobs in the government.

The new government has seven vice premiers - a record number in Russia's history.

They are the two first vice premiers Viktor Zubkov (the former prime minister) and Igor Shuvalov (former deputy head of the presidential administration).

There is an important newcomer - Igor Sechin, who will work as the vice premier responsible for supervising industrial policy.

Alexander Zhukov and Finance Minister Alexei Kudrin kept their vice ministerial positions, and Sergei Ivanov was "demoted" from one of the first vice premiers to the position of a "plain" vice premier.

It is interesting to note that out of the seven vice premiers, two had previously worked in the presidential administration. All seven owe their careers to Putin, except Zhukov, Kudrin and, to a lesser extent, Shuvalov. The latter held important public positions before Putin's coming to power in 2000. All are avowed Putin loyalists, and at least four (Ivanov, Sechin, Zubkov and Shuvalov) are reported to be Putin's personal friends.

Traditionally, vice premiers played the role of strategists in the Russian government, "supervising" separate sectors of the country's economy.

Unlike the "plain" ministers, who were usually seen as technical figures carrying out the decisions of Kremlin strategists, vice premiers have generally been seen as political heavyweights.

The sheer number of vice premiers in the new government is seen as significant, reflecting Putin's desire to have as many people as possible from his old team in the Kremlin at his disposal.

The other important appointment is the move of Sergei Sobyanin, the former head of Putin's administration in the Kremlin, to the position of the government's chief of staff. Sobyanin, a tight-lipped former governor of Tyumen, is one of the few members of the new government without a St. Petersburg background or a history of friendship with the new prime minister. He is seen as a powerful administrator.

Traditionally, the president was the most important center of power in Russia (the second one being the government).

Sergei Naryshkin was appointed the administration's head. Before his appointment, Naryshkin worked as the government's chief of staff. A native of St. Petersburg and a friend of Putin, he is also seen as a strong loyalist of the new prime minister.

The key figures of Viktor Zubkov's cabinet, which, in compliance with the Constitution, resigned after Medvedev's inauguration, remained in the new government.

Finance minister and Vice Premier Alexei Kudrin, the main "economic liberal" in Zubkov's government, is seen as a staunch monetarist, and kept both of his positions.

The Minister of Foreign Affairs Sergei Lavrov and the Minister of Defense Anatoly Serdyukov both kept their positions. Under the new structure approved by Medvedev, the president will supervise the activities of both the Foreign Ministry and the Ministry of Defense directly, as well as the Ministry for Emergencies, the Federal Migration Service, the new Federal Agency on CIS Affairs and several others.

FSB chief Nikolai Patrushev was transferred to head the Security Council, a structure which had considerable powers during the Yeltsin years.

As for the head of the KGB's successor, the FSB, Medvedev appointed Alexander Bortnikov, the FSB's former economic security head, in a move expected to shift the focus on corruption.

While some experts warned that there was more change to come, Sergei Markov, a political analyst, said he did not expect any more substantive changes.

According to him, the chief distinguishing feature of the government is the balance of power between the Kremlin and the seat of Putin's cabinet of ministers.

"Putin has lent an ear to the concerns of the general public, who feared that in this scenario a dispute between Putin and Medvedev might be dangerous. Hence, a single structure has been created." "We cannot talk of Medvedev's team as opposed to Putin's team - this is one unified structure." -