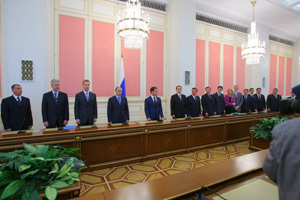 Igor Shchegolev, who formerly headed the presidential protocol service, will now be responsible for the bigger Ministry of Tele- and Mass Communications. This will now include the media.

Nikolai Patrushev's replacement as the FSB head was expected. Other structural changes and appointments are not so dramatic, but very logical. They correspond to the new government's key tasks, which Vladimir Putin stated on May 8

The Ministry of Industry and Trade will be run by long-time official Viktor Khristenko.

A new ministry will supervise the energy industry, with a nuclear expert in charge. This is understandable - fuel and energy form the backbone of Russia's economy, and nuclear power may be one of Russia's competitive products destined for the global market in the decades to come.

Federal agencies will survive, with a few exceptions. Russia does not need administrative revolutions.

Now the government has a three-tier structure, with deputy prime ministers for supervision, ministries for ideology and agencies for implementing ideas.

If the new prime minister had given up this arrangement, executive mismanagement would have been even worse than in the early 1990s. -