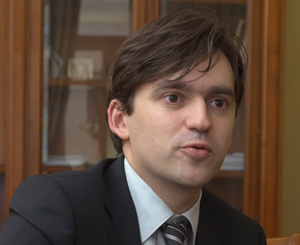 On June 6-8, St. Petersburg, Russia's "northern capital," will host the 12th International Economic Forum, dubbed the "Russian Davos" because of the range and scale of the topics discussed. One of the highlights of the forum is expected to be a speech by the new Russian President, Dmitry Medvedev.

Taking part in the discussions and roundtables will be the heads of many major world corporations and international financial institutions such as Microsoft, Merrill Lynch, Coca-Cola, Intel, Dubai World, ING Group and the International Monetary Fund. Deputy Minister of Economic Development Stanislav Voskresensky, who oversaw the organization of the St. Petersburg Forum-2008, describes the program:

This year's program is noted for the diversity and scope of its themes: it will focus on the hottest topics among the world's political, financial and business elites. In work of the Forum will take part such prominent economists, as Daniel Yergin, Chairman Cambridge Energy Research Associates, and Founder and Executive Chairman of the World Economic Forum Klaus Schwab, Executive Director of IMF Dajsuke Kotegawa (Japan). The report on "Economic: the global analysis" will be made by Heinz Nixdorf, Professor in European Integration and Economic Policy, President Emeritus of the Kiel Institute for World Economics Horst Siebert.

Roundtables will be led by the First Deputy Managing Director of the IMF's John Lipsky, the author of the "BRIC" concept and Managing Director and Chief Economist of Goldman Sachs, Jim O'Neill and Russian scientist Sergei Kapitsa.

The agenda will include a discussion of the threats that may arise in connection with a world financial crisis. We must try to understand what the proper balance of global and national interests in the 21st century should be, as new global players and centers of economic growth appear.

Another important topic is protectionism. It is a new problem arising in the world, especially in developed countries.

The Forum will also look at the food market, as well as the environment and global climate change.

A roundtable discussion will be held on the regulation of intellectual property.

Can solutions be found to the world financial crisis and rising food prices?

Russia must make its contribution to world financial security.

We believe that Russia could be a financial center and provide investors with an opportunity to conduct part of their operations here and thus diversify their risks.

We will make some proposals regarding agro-inflation. Some economists believe that the period of low food prices has come to an end and agriculture has a real chance to increase its profits.

Other analysts think food prices are unjustifiably high. But I would like to point out that last year none of the experts were able to correctly predict the extent of the growth in grain prices. So the problem obviously needs to be discussed further.

The St. Petersburg Forum has traditionally been a way of attracting foreign investments to Russia. What are the sectors to which you would like to attract investments this year?

Investors - both Russian and foreign - will be encouraged to go into the sectors that cause the greatest concern and which are heavily under-funded. Above all, I'm talking about infrastructure.

When investors decide to put their money in this or that country, they listen to statements by those countries' officials. They are also interested in the debate going on in the country and in the mood of the business and expert communities: what signal is our country sending to the rest of the world?

Many investors still take a guarded view of the prospects of private-public partnership, investment in infrastructure and concessions. What is holding them back, and how can these barriers be overcome?

Russia has passed a law on concessions, but it is basically a framework law that just states that concessions can be created. We have run into a host of technical problems.

Amendments to concession legislation that will regulate tax, land and other concession-related issues have been developed and are due to come into force this year.

I think the most important thing for any investor is predictable rules of the game. So I would mention another important law, the law on foreign investment in strategic sectors. It is the first and very serious step that formalizes our relations with foreign business.

These will be some of the most important question arising at the forum. -