A Roadmap to Cooperation 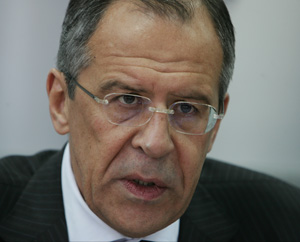 As the recent summits - NATO, Russia-NATO Council and Sochi, for example - have shown, it is very difficult - often impossible - to adopt collective strategies and actions without a proper understanding of modern history. For reasons psychological and political, some of our partners have not been willing to accept the new world reality of global geopolitics and economic globalization. Indeed, many behave as if nothing has happened in the past 16 years.

Russia has long been embarked on a road of radical transformation, and has accepted the reality of a liberated world with its emerging world powers. It is necessary that all countries must change in order to continue this process. This reality is not made easier by the attempts of some political forces to replace a NATO vision of what might now be an obsolete "Soviet threat" with a new "Russian danger."

Russia is not averse to the idea of global regulation. We are more than ready to compromise in world affairs in order to resolve common problems together. Indeed, our ideas about the collective leadership of major powers, of shared cooperation between Russia, the EU and the United States, and of strategic transparency are directed toward this goal. We are also convinced that without cooperation among the three, the world will never be in any position to guarantee stable collective security in this part of the world. And we are convinced that one-sided actions, such as the unilateral declaration of Kosovo's independence, deployment of U.S. global missile defense elements in Eastern Europe, and the continued lobbying for Georgia and Ukraine's accelerated entry to NATO, are diametrically opposed to this goal.

The consequences of the above actions are two-fold. On the one hand, Russia's relations with Western Europe will return to the state they were in the past - as a simple function of Russian-U.S. relations. On the other hand, there will be unavoidable tensions in transatlantic relations and new obstacles to hinder European unity. I think that there will be no winners here.
There was a lot of criticism of the results of the recent NATO Summit in Bucharest. Russia was not happy with much of the substance and for this reason it failed to produce a joint document.

Key to this failure was the refusal of some partners to understand the principle that no side should insure its security at the expense of the security of others.

This does not mean that the Council Summit was without success. For the first time ever, the Russia-NATO Council worked in the format it was originally designed for - as a body in which all countries take part as national entities, rather than bloc members.

This development was exactly what allowed our partners to consider the Russian position on the sensitive issue of NATO's eastward expansion at the same time that they made their own decision on the issue.

Russia does not claim any veto rights. But I think that we have the right to expect reciprocity if our partners expect us to consider their interests.

Indeed, without such reciprocity, it is hard to see how the Bucharest Summit could have produced an agreement on ground transit to Afghanistan in support of the international force to counter terrorism and drug trafficking under a UN mandate.

It would, after all, have been easy for us to let NATO carry out its international mission in Afghanistan on its own.

But we did not do this, just as we do not take up a negative position on the reconstruction of Iraq statehood and economy.

Russia will continue to be involved to such an extent as meets our interests and principles of equal cooperation.

And at the same time, we will not attempt to imitate NATO, claim the right to resolve all global problems independently, or claim immunity from the influence of our partners.

It is unclear how long the EU will be able to exist as a state where its countries have domestic and foreign policies that are contradictory. Kosovo is a glaring example of this dichotomy.

Former British diplomat Robert Cooper has argued that under the cover of NATO and the EU, a state may weaken or break into fragments if decentralization (i.e., the transfer of power from central bodies to regional and local levels) turns into disintegration.

In other words, this transfer in power may cause other EU countries to break into smaller entities, before the EU itself turns into a "Europe of regions." Separatist and nationalist attitudes would drag Europe back into history.

In this context, the recognition of Kosovo's sovereignty works to complicate inter-European tensions. Some Europeans are aware of this, and have consistently refused to follow suit. Some believe that only binding resolutions addressed to domestic separatists can save a country from disintegration.

We can also mention the problem of red tape in Brussels, which is growing as a result of the EU's largely politicized expansion and the consequently lower level of homogeneity. This makes it more difficult for the EU to give a timely and collective response to events.

We all need to stop, think, and, preferably, think together. We need to switch our attention to the important issues, a move that would concentrate all international players.

We need to "change the topic of our conversation," as Vladimir Putin put it at the Bucharest Summit.

In a mutually dependent and globalizing world, its financial and economic challenges need to be tackled first. It is obvious to us that post-war currency, financial, economic and trade systems are in need of radical reform, and more substantial reform than the policies currently suggested. There is still time for us to make the right independent political choice in this regard. But we may find ourselves reacting spontaneously to developing crises much sooner than we think.

It is in part because of this that we must also revise the role of force in global politics; or as the U.S. security expert Zbigniew Brzezinski has said, to take a step back from making the role of force "absolute." Recent history has given more than enough grounds for such a revision. If we are to take the thoughts of Robert Cooper, and to consider the military might of America as a "central fact of current geopolitics," then we might believe there is no international problem that today is not viewed through the prism of military force.

It is also hard to ignore the arguments of American economist Joseph Stiglitz about the irreversible effects of the Iraq war on the U.S. and the global economy. He confirms historian Arnold Toynbee's hypothesis that militarism is essentially self-destructive for empires. Americans themselves believe that this situation cannot last forever. The former policy of stimulating the economy with military investment is no longer effective, all the more so because, as Brzezinski has also admitted, a system of checks and balances is not failsafe in the conditions of the Iraq war.
We need genuinely collective decisions here; decisions reached with the participation of all, including those whose sovereign wealth funds are a major source of refinancing the U.S. banking system. This applies in particular to Russia, which has been a significant catalyst for global economic stability because of its consistently high levels of economic growth.

And none of us should lose sight of another important point: that a model of development that places emphasis on never-ending consumption will always fail to provide answers to the challenges of environmental pollution, global poverty and climate change. The crisis on the world food market is yet another example of this. It is no coincidence that this subject may occupy a central place at the next G8 summit in July.

A moral approach to sustainable development is becoming increasingly urgent. Without that, it will be impossible to cope with many problems involved in controlling global processes. International relations themselves should be based on a common moral denominator, something that has always existed in the major world religions. Dialogue between civilizations and religions play an important role - precisely why we suggested setting up a consultative council of religions under the UN, and why we will support the Alliance of Civilizations, the Council of Europe, and all other platforms for discussing this subject.

The Summits in Bucharest and Sochi have made it clear that Russia's relations with its partners should not be described as confrontations. Perhaps such descriptions are designed to present us with an ultimatum - "cooperation according to terms laid out to us," or confrontation will result. But this is a false choice, and one that we do not recognize. We have always said we are against confrontation, just as we are against an arms race. There is simply no objective reason for Russia to take part in such endeavors.

Without equal footing, however, we will have little choice than to "leave decisions to the time and force of circumstances," to occupy the same position of "resolute non-involvement" that famous Russian poet Fyodor Tyutchev presented when Russia and the rest of Europe failed to understand each other after the Crimean war.

Needless to say, Russia will react to attempts to cause unacceptable damage to its national interests. However, we will do so minimally, proceeding from the principles of reason and international legal standards, in an open and predictable manner. Indeed, for some time now, our straightforward conduct has given no grounds for talk about an "unpredictable and mysterious" Russia.

Russia does not aspire to less trust or mutual understanding; Russia is against alienation. But if our marriages are to be made in heaven, sooner or later we will have to unite in the face of common challenges and threats on the sinful soil of our national interests. We do hear calls for "pragmatism" from our partners, but we do so without a parallel discussion of such notions as "strategic partnership."

If we are to improve international relations, we only have one real choice: multi-faceted diplomacy. Our ever-smaller world is conducive to this. It will always be possible to find a partner with common interests, remembering that every facet has its own value.

Russia's number one issue is cooperation on equal grounds. Russia wants partners who are prepared to consider our interests and come to compromises on different problems, including those that shape the strategic climate of the world and concrete regions.

The Sochi declaration on the strategic framework of Russian-American relations has quite rightly emphasized the need to turn our relations from strategic rivalry to strategic partnership. Both sides recognize the need to overcome the barriers of past principles; to concentrate on real threats; and to settle differences in a spirit of mutual respect. If both sides adhere to these principles, we will not be passive onlookers on the international arena. And we will move on from the principle of viewing Russian and American success as contradictory elements.

Recent events are giving much food for collective thought with regard to the future of European-American politics. We already have enough experience to be able to assess the situation adequately; to decide what is realistic and what is not; to decide what meets our common interests, and what will drive us further apart. I would agree that after Bucharest and Sochi we have all found ourselves at a crossroads, and we should all decide where to go from here.

In conclusion, I would like to add my own support to Hans-Dietrich Genscher's appeal in the Berlin-based magazine Junge Welt - to unite in the face of dramatic changes worldwide, and, on an collective and equal footing, to build "a new world order [...] perceived as fair by everyone and everywhere." -