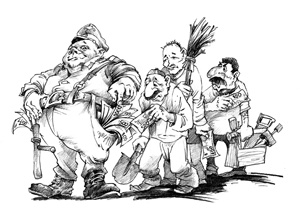 The Russian government is currently preparing a new law to regulate immigration from the Commonwealth of Independent States (CIS). Many suspect that far from making things easier, it will simply fill the pockets of state officials. Unfortunately, this is quite common in Russia: restrictive laws only serve to increase the size of bribes.

The Director of the Federal Migration Service, Konstantin Romodanovsky, recently said that immigrants cost the Russian economy $9 billion. It mystifies me where the official got that incredible figure.

In The Netherlands, which has a population of 16.5 million, there are more than 3.2 million foreigners in the labor market and 67% of them are not EU citizens. That accounts for more than 20% of the entire population and about 27% of the country's workforce. The situation in other EU countries is similar.

Illegal migrants' contribution to Russia's current economic growth is obvious. Labor migration from the CIS countries should be encouraged in every way. A new quota is being discussed that would cap the number of foreign workers at 6 million a year. That accounts for about 8% of the national workforce, or 4% of the population.

Such a modest quota would have to accommodate housekeepers, nannies, nurses who care for the aged and the disabled, foreign journalists, employees of major firms, and so on.

But if, as the official claims, more than ten million foreigners (some officials even mention the figure of 15 million) work in the country illegally, why is the quota so small? Do we want a labor shortage?

Of course, most immigrants live and work in Russia illegally (only half a million migrants are officially registered), and that adds to the already considerable social tensions in Russian society. But one should understand that trying to deal with these tensions with a formal cut of migration quotas and campaigns to send "illegal immigrants" back is, in the present situation, like scooping up water with a sieve.

The porous borders within the CIS and the need of the Russian economy for labor - so far low-skilled and low-paid - bring corruption and crime to that sphere of social life.

If foreign workers do not have to hide for fear of being caught and exiled from the country, the bureaucrats will find it harder to extort bribes.

The parliamentary session of CIS countries must urgently pass a law on the free movement of labor. It will give a boost to investment activities in all countries concerned. By granting businesses and individuals from CIS countries a chance to work in Russia legally, we will decriminalize the market of migrants. If only the general public in this country knew how hard it is to obtain a work permit in the Russian Federation, people would understand why illegal foreign labor is used on such a wide scale. It is the bureaucrats, not the "illegals," who have a stranglehold on the country.

In a side note, I'd like to mention that in the European Union, bureaucrats are required to spend a period of internship in the business spheres that they supervise. This is done to make business more effective and remove bureaucratic barriers.

In Russia, that tradition, founded by Peter I, survived until the last Russian tsar, Nicholas II. Today it has been forgotten. Peter I and many other Russian emperors worked in key sectors of the public economy. Alexander III, when he was still heir apparent, spent many months in woodworking factories, and in the glass and brick-making industries as an apprentice. This was done so that they would understand the "real" economic situation and help to develop it.

Unfortunately, many modern-day Russian officials are not interested in the success of the industries they oversee. To be a harmonious country, we must above all put an end to bribe-taking and extortion. This is the ugliest phenomenon in present-day Russia because it is so widespread. -