Not typical but also russian 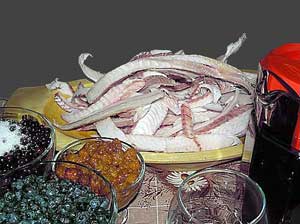 There's a hard and fast rule on national cuisines that goes something like this: the further you go from temperate, middle-of-the-road climates, the weirder the food seems to get. Russia, which encompasses a whole range of climate zones, from the sub-arctic to the subtropical, is a perfect example. In the heart of the country, all is as it's supposed to be, with people eating food that is traditionally thought of as "Russian" - borscht, cutlets, blini, etc. Go north, however, and an entirely different picture of Russian cuisine begins to take shape.

If you're reading this at the St. Petersburg Economic Forum, you probably imagine that you're in the north of the country. Technically, you might be. But as far as cuisine is concerned, you might as well be in Moscow or Sochi. When I say north, I mean places like Oymyakon, a Siberian village that sits on the edge of the Arctic Circle and holds the distinction of being the coldest permanently inhabited place on Earth. What do people traditionally eat in a place where six months of the year are spent in nearly perpetual darkness, where it gets cold enough (winter temperatures in Oymakyon regularly hit -40 degrees Celsius, and lows of up to -71 degrees Celsius have been recorded) to freeze ink in pens and spit in midair?

Well, they sure don't sit around making beef stroganoff. These hardy people have rarely had the time or the resources for fancy food preparation. Most of the dwellers of Russia's extreme north - whether they are ethnic Russians or the land's indigenous inhabitants -have traditionally relied on meat, fish and other things that can be locally obtained and aren't spoiled by a little freezing. Fruits and vegetables are practically non-existent, due to the short summers and permanently frozen ground, but the northern climate does yield several delicious varieties of berries. Reindeer meat and muksun, a kind of fish, are common. Pelmeny - meat-filled dumplings that can be frozen and left outside for months, are a favorite. And then, of course, there's stroganina, a quintessential northern dish made from frozen slices of meat or fish. Here's a simple recipe for fish stroganina that's delicious all year round, as well as some mors, or Russian berry juice, to go with it.


1. Skin frozen fish using a filet knife. Make sure to use a knife with a long, flexible, sharp blade.

2. Hold fish vertically, tail up, and begin slicing off thin slices from the top down. The strips should be as thin as possible and curly, like wood shavings.

3. Mix paste, pepper, salt and vinegar. This will be used as a dip.

4. Serve while still frozen, with dip on the side.

1. Wash cranberries thoroughly.
2. Place cranberries into deep bowl and mash with a wooden spoon or pestle.
3. Add a glass of water, mix, then strain the mixture through a thick white cloth
4. Place juice back into bowl, thoroughly pulping any unpulped berries.
5. Add another glass of water, stir and strain once again.
6. Repeat 3-5 once more.
7. Throw away pulp. Dilute juice with water, add sugar to taste.