Booming retail sector set to be largest in Europe 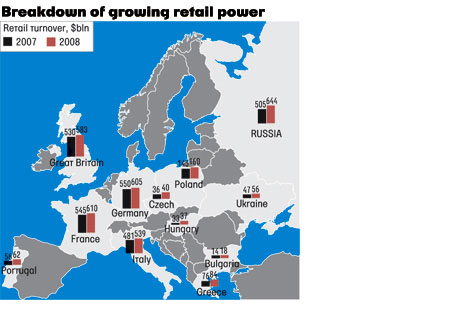 A new research report has suggested that, during the course of this year, the total value of the Russian retail market will overtake its counterparts in Germany, France and Britain. The sector is expected to grow by a staggering 27.5pc this year, and by at least another 20pc in the next two or three years.

Russia's per capita retail turnover will, however, remain some way behind that of West European countries. In 2008, it will reach $4,542 - less than half that of Britain, the European leader.

This retail growth seems to be driven by a desire by Russians to spend, and spend quickly. According to the Centre for Macroeconomic Analysis and Short-Term Forecasting, Russians spend as much as 83pc of their incomes on goods and services. Sales of non-food products are growing especially fast, said the centre's Igor Polyakov.

High- and medium-income population groups are increasingly buying high-end goods - designer refrigerators over mass-produced ones, and plasma panels over common TVs. LCD TV sales surged 200pc in the first quarter of the year, and sales of laptop computers by 300pc.

Russian retailers remain optimistic of further growth. Some 85pc of the 49 companies polled by Ernst and Young said they expected no less than a 30pc growth rate over the next four to five years. -