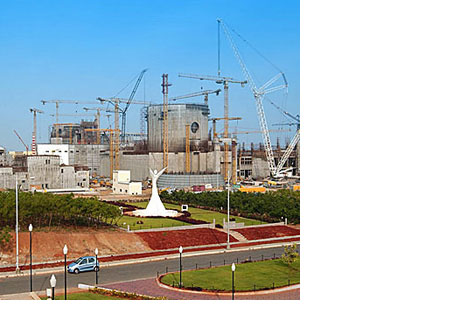 In May, foundations for the first reactor unit began to be laid at the Novovoronezh Nuclear Power Plant (NPP-2) in central Russia. The first concrete poured into place marked the start of construction of the most advanced nuclear power plant.
The AES-2006 project drawn up by Atomenergoproyekt is the first of its kind in Russia. Abroad, however, it has a "forerunner": the world's first third-generation NPP currently being completed in Tamil Nadu, India.
"The projects being implemented in Kudankulam and Novovoronezh are the same," said Nikolai Shingaryov, deputy director of Atomexpo. "Their main feature is that they have duplicating active and passive safety systems. The Novovoronezh plant, in addition, has upgraded automatics, reducing the overall costs while keeping the same safety standards. The plant will use improved 1,200 MW reactors and its service life will be extended to 50 years."
Engineers in Kudankulam are now putting the finishing touches to the welding of the first circuit and assembly of the first reactor. The trial start-up is planned in a year's time. Four more units are likely to be begun by then, in addition to the two already under way. In February, Russia and India agreed to continue their nuclear cooperation.
The Indian government has ambitious plans. Its rapidly developing economy is demanding ever-more power generating capacity. By 2030, the country plans to have built at least 10 nuclear generating units with a total capacity of 8,800 MW. Who will build the other plants is not yet known, but the competition will be stiff: in addition to Russia, America and France want to enter the Indian market.
Russia's ambassador to India, Vyacheslav Trubnikov, is sure that cooperation between the two countries will be long and profitable. The growing Indian economy needs the latest technologies, and Russian companies need long-term contracts. Also, specialists for Indian plants are trained only in Russia, or rather in Voronezh. That is another argument in favour of international cooperation.
These are not the only cards Russia holds against other competitors.
"Our main advantages are experience and quality," said Vladimir Rogov, an engineer from the Gidropress design bureau. "Besides, our reactors have got top marks for safety."
The developers have foreseen practically every possible danger: earthquakes, hurricanes and even falling aircraft. Kudankulam's generating units actually stood up to a real tsunami two years ago. In cases of more serious emergencies, safety systems will automatically shut the reactor down without human intervention, while a special trap will catch and cool the core melt.
"The project's very design makes it safe," said Alexander Kvasha, deputy head of Atomstroiexport's Kudankulam office. "If the reactor overshoots the preset point, nuclear fission stops automatically. A coolant leak also halts the reactor."
"The project features impressive defences: strong physical barriers stand in the way of ionising radiation and radioactive materials," said Oleg Rozhin, head of field supervision for Atomenergoproyekt on the Kudankulam site. "Protection of both staff and the public is being given top priority," he said.
The requirements of the Novovoronezh project are the same: safety, individual focusing, and minimal environmental impact. Developers have taken everything into account: from wind speed and terrain to differences in mentality.
The basic design is improved all the time as new materials appear and reactor capacities are increased. There are no two identical solutions, say scientists. However, "revolutionary" approaches are unacceptable. Nuclear energy must follow an evolutionary path.
In Tamil Nadu, the shortage of electricity is met by wind power. The combined capacity of local wind plants is 2,000 MW, or as much as the output of the two Kudankulam reactors currently under construction. In future, wind power will take a back seat. Specialists say renewable sources of energy are unreliable because they are unpredictable. Besides, over the past few years the wildlife of Tamil Nadu has undergone some change, and residents have started to complain of sleeplessness, headaches and depression. Environmentalists say low frequencies generated by the wind plants are to blame.
Central Russia is not yet complaining of power shortages. The generating units of the Novovoronezh and Kursk nuclear power plants send power to the neighbouring Lipetsk, Orel, Bryansk, Tambov and Belgorod regions. But by 2020 power consumption in the central area will rise by 50%. The construction of two generating units at the Novovoronezh NPP-2 is expected to meet part of the requirements. Like Tamil Nadu, the region also cast about for alternative energy. But the choice fell on nuclear power - other projects proved less effective in present-day conditions.

The agreement to build the Kudankulam NPP to the AES-92 design with two VVER-1000 reactors was signed between the Soviet Union and India on November 20, 1988. In 2002, Atomstroiexport and the Nuclear Power Corporation of India Ltd. (NPCIL) signed a contract to prepare documentation, supply equipment, and train Indian personnel. The project was developed by Moscow's Atomenergoproyekt institute, the VVER-1000 reactor was designed at the Gidropress design bureau, while the Kurchatov Institute acted as the project leader. The AES-92 design was awarded an official certificate of compliance by European operating entities.
All in all, more than 100 Russian companies have taken part in the project. The first team of Russian specialists arrived at the construction site in October 2002.
The Kudankulam plant is being built according to a Russian design involving a new-generation reactor which meets international requirements applied to nuclear plants commissioned after 2000. The project includes building two VVER-1000 power reactors which use uranium dioxide as fuel and light water as coolant and moderator.
The project, developed at Atomenergoproyekt, features enhanced safety. The new quality of security is achieved by making the most of passive safety systems:
- double protective envelope for the reactor building;
- eight additional accumulators for passive flooding of the core;
- 12 heat exchangers for passive core heat removal able to operate for an indefinite period of time without operator attendance;
- new passive system for rapid injection of boron to make the reactor go subcritical.
To deal with a hypothetical situation involving the core melting, Kudankulam is provided with a device located under the reactor vessel and used for trapping, cooling and containing the core's fuel melt.
Protection is also provided against natural and man-made dangers, such as:
- earthquakes;
- tsunamis;
- hurricanes;
- falling aircraft.
The main advantage of the new reactor is the use of advanced equipment and adoption of additional passive safety systems combined with traditional active arrangements, which adds to the reliability of the Kudankulam plant.
Work going on at the construction site of the Novovoronezh NPP-2.