BRIC: headed towards a better and a glorious future 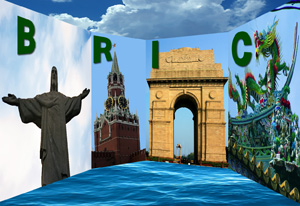 The meeting of Brazil, Russia, India and China (BRIC), for the first time officially, in the Russian city of Yekaterinburg on 16 May 2008 is a defining moment in the annals of international politics. The likely success of BRIC would fortify the emerging pluralistic structure of international order in more than one decisive ways. Russia which is part Europe and part Asia has already emerged as a strong power despite oppositions. Similarly, China and India are emerging to be the major economic power houses in Asia in the coming years. And the South American Brazil's joining the group would add not only an international and polycentric dimension to the initiative, but also open up the possibilities of the group emerging as a global balancer and economic power house.
The Russian foreign ministry spokesman observed at the sidelines of the meeting, "BRIC unites the major economic growth centres with more than half the world's population, the role of which in international affairs will grow." Successful economic cooperation between these countries would likely help Russia not to worry much about its oil and gas business with the West or its fragile balance of relations with the EU countries like France and UK. But, its sustainability and robustness would depend on how far the four countries manage their interests with a broader objective of economic cooperation in a non-zero sum game framework.
As intended by the participating foreign ministers of the four countries, its political clout would likely grow further. The meeting called for a fresh opening of talks between Belgrade and Pristina to moderate the violent situation in the Balkans. Similarly, on the Iran issue these countries called for international mediation and to find a middle ground, instead of using any kind of coercion.
In fact the advantage of the four countries coming together is enormous. It is in retrospect one can say what Goldman Sachs predicted in 2003, is now a reality. Goldman Sachs had predicted that by the year 2035, the combined economy of BRIC countries would surpass the economy of the most prosperous group of G-7 (except Russia). The combined population of these four countries especially that of India and China, surpasses for more than half of the world's population, with a huge and fast growing consumer market. The combined GDP of these four countries is about US $ 15.5 trillion. China has a foreign exchange reserve of more than $ 1.5 trillion, Russia has foreign exchange reserve of about $ 500 billion, India has about $ 300 billion and Brazil around $ 200 billion. According to IMF in 2007 the combined GDP of these four countries made up 12 per cent of the global GDP. In the past two years stocks in these countries have risen 70 per cent and markets have grown at the rate of 42 per cent. Hence, when the US says that the Indian and Chinese middle class are growing fast and consuming fast, this itself shows the American recognition of the fast rising economies of India and China. Second, all these four countries can work together to meet each other's requirements. Russia has the largest reserves of natural gas and second largest reserves of oil. On the other hand, India and China are energy hungry countries. Hence, in this background, it is but naturally possible when India and China can fill the consumer market voids in Russia and Brazil, Russia and Brazil can meet energy and raw material needs of the two countries. India's high IT skills and manpower and Chinese massive production of goods can complement the Russian and Brazilian economy.
Third, international issues like the Kosovo crisis, NATO's movement towards the East, especially its recent movement to woo Ukraine and Georgia, the Iran issue, etc. can be met and judged on a collective basis. While Russia and China are permanent members of the United Nations Security Council, India has strong clout among the third world countries. It is indubitable that the collective political will of these four powers can checkmate any unilateral actions in contravention of the UN Charter. Fourth, these countries can work together to tackle international menaces such as drug trafficking, terrorism, and formulate common stand on issues such as environment, climate change, ozone depletion issue, weapon non-proliferation, food and energy security, etc. It can be mentioned here almost all of these countries have suffered from the menace of terrorism. Whether it is Kashmir in India, Chechnya in Russia, or Xinjiang in China, these countries have faced terrorist violence.
The BRIC is in its infancy. The most pertinent question that needs to be asked is how far this nascent body (though the idea came earlier, and the foreign ministers of these countries met at the sidelines of the UN meetings in 2006 and 2007) would go in making the collective dream a practical reality. It nonetheless needs emphasis that these countries would have to rise above bilateral rivalries in order to play a more responsible and responsive role in international arena. Whether it is India's border issue with China, or China's likely encirclement of India through Karakoram and Pakistan's Gwader port, or through the Indian ocean; or the Chinese-Russian rivalry and the issue of Chinese mass migration to southern Siberia and other issues of contention-all these need to be looked from a broader perspective. There are also fears that high corruption rates in these countries and strident regulations against foreign investment may hamper the prospects of fast growth of these economies. However, if BRIC intends to rise as a global balancer and as a repository of economic power, the member countries have to work together in a more constructive and collaborative framework.

Dr Debidatta Aurobinda Mahapatra is a research faculty in the Centre for Central Eurasian Studies, University of Mumbai (India).