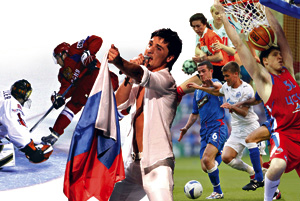 Early in the year numerous star gazers, whose forecasts Russians often heed, predicted that the country would score successes in every sphere. They said that Russia was under the sign of Aquarius, which was a sure sign of success. Predictions began to come true five months later.

First, the Russian women's tennis team defeated the US in the Fed Cup semi-final. The match took place in Moscow, was billed "the battle of the giants" and eagerly awaited. But as soon as the American line-up was announced enthusiasm among fans faded. Neither the Williams sisters nor Lindsay Davenport, ranked among the world's top players, came to the Russian capital. Instead of recognised stars Shamil Tarpishchev's team had to compete against young players from the second hundred in the ATP rankings. The result was half-empty stands and a total lack of interest in the outcome, which was a foregone conclusion. The Russian team won easily and confidently, but such a victory brought little joy. The tennis players came away lamenting that instead of a real fight they had to deal with second-rate players. The Russian team, current holders of the Fed Cup, have again made it to the final. Their rival this time will be Spain.

While the success of the women's tennis team had been expected, the same cannot be said of Zenit St Petersburg's triumph in the UEFA Cup. Our football players seldom give their fans cause to celebrate. Even in Soviet times only Dinamo Kiev and Dinamo Tbilisi managed to get the Cup Winners' Cup, itself not the most prestigious of trophies, but these teams now represent other countries. The first success of a Russian club dates back to 2005, when CSKA Moscow won the UEFA Cup. So jubilant was Russia that it declared the day of the win to be Football Day, but the idea did not fly.

Three years later Zenit matched CSKA success by beating the Scottish team Glasgow Rangers in Manchester. After its impressive victory in the semi-finals over Bayern Munich, an odds-on-favourite in that tournament, Dick Advokat's team became unstoppable. Not even the 150,000-strong army of Rangers fans, which had come to root for their team, helped.

Wild celebrations followed. St Petersburg was in a frenzy of jubilation for several days. And the country's leaders, most of whom happen to be Zenit supporters, congratulated their heroes.
At the same time the flagship of Russian men's basketball, CSKA Moscow, was playing in the Euroleague's Final Four for the sixth time in a row. That event is fast gaining popularity in Europe and experts believe it may soon put up a real challenge to the NBA. CSKA had only won the trophy once before, but in Madrid the team had a remarkably easy and convincing victory. In the final it trounced Israel's Makkaby to become the strongest team in Europe. After the final, CSKA president Sergei Kushchenko said, without a moment's hesitation, that he considered the American John Robert Holden to be the hero of that game. Holden recently assumed Russian citizenship and has already played for Russia in the European championship and won. It added to Holden's popularity in Russia.

"There is no doubt that John Robert Holden was the main hero. In the six years that he has played for CSKA he has grown into a real star player. He is a silent leader, who peps up his partners not with words but with what he does on the court. When the team is in a spot of trouble Holden takes the ball, scores crucial points and brings confidence to the team," Kushchenko said.

The next good news was already in the pipeline. In the world hockey championship in Quebec, Canada, Russia's Red Machine won the world title for the first time in the last 15 years. A year ago, playing at home in Moscow, Russia came third while the Canadians won the gold. Now it is the other way around. The final pitted the Canadians, the founders of ice hockey, against the Russians, their eternal and most formidable rivals. The Russian team was trailing behind the Canadians for most of the match but snatched victory in overtime. Words fail to describe the jubilation among the fans after that victory. The several hundred Russians who had come to watch the match in Quebec celebrated far into the night, while back home in Moscow and other Russian cities people took to the streets to celebrate the historic triumph. Twenty-four hours later the whole team was received by President Dmitry Medvedev.


No sooner did people recover from their joy than word came that the Russian ice hockey team had reclaimed the world title in Quebec for the first time in 15 years.

The latest triumphs of Russia's athletes have made their fans believe that they can scale new heights. Many think that with luck the Russian football team may win the European championship and that at the Beijing Olympics the Russians would win the biggest number of medals. People just can't believe that Russia may run out of luck in the year of Aquarius.