Small companies wait for the bonanza 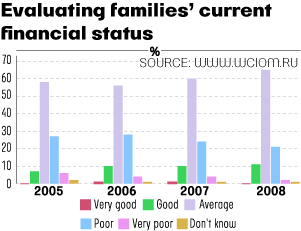 "If, as the authorities promise, small enterprises will be spared unwarranted checks, unnecessary approval procedures and crippling taxes, the country may indeed see quick returns, especially in the social sphere," says Yury Shein, who was one of the first creators of a cooperative in Russia before becoming the owner of a small pastry company. From the lean 1980s until recently, his inexpensive Bird's Milk pies, made according to a unique recipe, were snapped up.

"In America in the mid-'90s, I saw that all you have to do to open a business was to buy an envelope, fill in a form and drop it in the postbox. No inspections in the first two years. If you fail to survive for two years, nobody will bother. If you do survive, the government will look closely at your tax-paying record and the quality of your goods or services. The system of fines and penalties is tough, but fair," Mr Shein says.

He thinks it unlikely that the system of business registration in Russia will become "like in America" any time soon. So far Russian small business has heard nothing but words and promises from the government. Not until it begins to do something will we be able to judge, says Mr Shein.

"Small business is like a lawn," he says. "You can water it copiously. You can treat every blade of grass. But one thing the lawn certainly needs is not to be trampled upon."

Shein has had to fight to protect his lawn. He went into the sweets business in 1987, when Russia was still under the Soviets. That year Moscow saw the creation more than 5,000 cooperatives. Russian businessmen have never since enjoyed such a quick registration procedure: you went to the special commission at the local governing body, showed your passport, got a permit for registration and you were ready to go. But problems began with protection racketeers fleecing the new cooperatives. Then, as now, the main problems were bureaucratic red tape, bizarre rules and artificial barriers that most overcame by paying bribes.

Yury Shein, being opposed to bribes, used strictly legal methods to overcome these barriers, displaying great ingenuity in the process. True, he admits that many times it would have been easier to pay - fighting bureaucracy legally is time-consuming and debilitating.

"In the late 1980s the Soviet Union was in the midst of a food crisis," Shein recalls. "So cooperatives were banned from using condensed milk and chocolates. But any ban forces you to be creative and look for new solutions."

To sidestep the bans, his team had to think of a new technology for making the filling for pies. They used blackcurrants and other berries with the agar-agar jelly made from seaweed found off the Sakhalin coast. He had to use all his ingenuity to procure the ingredients. He was only able to buy agar-agar weeds on condition that his firm built a pastry shop for a café in Sakhalin. The shop is still in business.

All in all, Shein built 25 sweet shops in 25 regions. Shein's pies were popular in Russia because of their excellent quality, and the company flourished. In the early 1990s he launched a parallel business by financing a private laboratory where several scientists worked on a hypothesis of so-called self-supporting malignancies. They came up with a universal test which can diagnose cancer from a droplet of blood. That process has been patented.

"There are no equivalents in the world," Shein claims. The diagnostic technique has been successfully tested in many Moscow clinics. However, it proved too much of a burden for a small enterprise. Loans, whether private or public, were practically impossible to come by in Russia at the time. There was not enough money to fund full-scale research, so the work had to be curtailed. Shein is still trying to raise the money. He says that to him business is not so much about making money as about fulfilling your creative potential.

"However, a Russian businessman cannot devote himself to creativity alone," Shein says, adding that over the past 20 years he has spent more time fighting off inspectors and supervisors than doing business.


"Still, I am an optimist and I think that litigation against aggressive bureaucrats is the first sign of a businessman's inner freedom," he adds. "Inspections were introduced with the noble aim of securing order. But my business experience tells me that in Russia any inspection is like hunting a hare. In this game the bureaucrats are the hunters and the businessmen are the hares."

An illegal administrative act can, however, be challenged in a court of law. Litigation resolves the conflict and brings a kind of peace. It is very useful in conflicts with regulatory bodies and other businesses. Shein reckons that he has spent at least 10 years in litigation. He has always won his disputes.

"If a real breakthrough happens in the relations between the state and small business," Shein says, "if they untie our hands and rid us of bureaucratic pressure, and help us, small business in Russia will enter a golden age." -