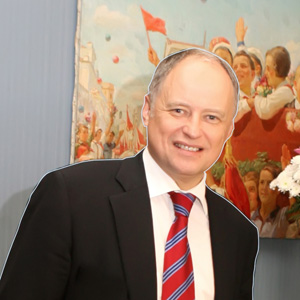 Sergei Borisov MA (economics), PhD. Born 1953 in Serpukhov near Moscow, graduated from Moscow Bauman Technical University, had onsite training at Oxford University, and worked at the Soviet Ministry of Higher Education. In 1991 became a businessman, holding the posts of chief manager at the research and production association Analit, and president and chairman of the board at Hermes-Moscow.
In 1997 he was elected president of the Moscow Fuel Association and in 1998, president of the Russian Fuel Union. Since 2002 he has been president of the Opora Rossii association of small and medium-sized businesses.
He is married with two children.


After the dissolution of the Soviet Union in 1991, Russian authorities did not help, and sometimes even hindered, the development of SMEs. The situation has improved only recently. Why?

The authorities had it nice and easy without SMEs. In the 1990s, Russia had oligarchic capitalism, and then it went to another extreme - state capitalism. The country now has a lot of money and galloping inflation; prices went up 4.8pc in the first three months of 2008, which makes me wonder how high they will be allowed to rise by the end of the year.

The authorities are coming to see that raw materials are not inexhaustible, and oil and gas production cannot be increased endlessly. Besides, the market situation can change overnight, and alternative energy sources are appearing.

In this situation, they should rely on human capital, promoting enterprise and innovation-driven companies.

Some propose replacing permits to set up small businesses with a notification procedure. How can this benefit SMEs?

This is a good proposal, but I don't think we should start with it. In the past, one had to get a state licence to set up a company, which soon developed into a major stumbling block. We thought we would be more comfortable without licences, but now we have to collect many other documents.

We are surrounded by a spiked fence of red tape. To open a restaurant in Moscow, you need to collect 254 signatures from officials, including many repeat signatures. It takes up to 18 months to get approval from 15 commissions for the construction documents and another 55 documents for state acceptance of the finished project.

Do you mean you do not have problems with bureaucrats after that?

I wish that were the case. No, after that you will be subjected to numerous inspections and need a large number of permits and certificates. More than 30 inspection agencies monitor SMEs. One of my colleagues has to request thousands of quarantine certificates for farm products within a month, for each batch of products to be shipped to another region.

To compile the requests, you must submit about 50,000 pages of documents to a territorial branch of the agricultural authority, Rosselkhoznadzor, stand in a queue for two days, and remember that they accept documents only twice a week.

There are 100,000 small firms in Russia working in this sector. So you may be too late in getting a certificate for perishable products whose expiry date is only three days away because your request cannot be processed for 30 days.

I view this as a war between bureaucrats and business, with traps and pitfalls everywhere, so that you have to pay everyone at each step. We spend about 10pc of revenues on these barriers, which the Economic Development and Trade Ministry has assessed at as much as 1.4 trillion roubles, or more than $59bn, a year.

But we cannot live without inspections. Otherwise who would guarantee that a cafe, restaurant, or grocery would not poison us? Or that garage mechanics would repair our cars properly, and we wouldn't have traffic accidents?

Quite so, but inspections should be different; they should involve civil society institutions and business. Professionals will easily determine who is the black sheep in their sector and deal with him.

We should develop self-regulation, with businesses controlling their sector and setting quality standards. Businessmen who violate standards and quality declarations should be punished. But we must be free from the daily bureaucratic yoke and arbitrariness.

There are more than 10 million officials of different levels in Russia. Should they have no contact with business at all?

Officials should work to ensure the end result, the same as business is trying to do. I was once part of a large business delegation in China. We visited different enterprises and discussed cooperation, while Chinese officials followed our every step and move.

I asked if they were watching us so that we would not damage China. They replied that they wanted everything to go well, because they are commended for ensuring the creation of new jobs and growth of gross regional product thanks to cooperation with Russian companies. In other words, their work is assessed according to results of business and economic development in the region. Moreover, their salary and very job depend on this.

We must do the same, involving officials in creation and production, or they will continue to invent more departmental rules, changing colour to survive innovations. Other countries have developed many methods for regulating relations between the authorities and business; we should use them instead of trying to invent the wheel.

Would you cite the examples of the United States and Britain, where SMEs have been developing for centuries, and had enough time to form the required relations with the authorities?

Of course, I would like Russia to emulate their examples. The United States is a classical venture country, with the American industry rising on venture investment. Small businesses greatly contributed to the development of science-intensive and hi-tech sectors and introduction of innovations, which urged technological progress.

The share of SMEs in the value of American enterprises is assessed at 42.4pc, and they produce 60pc of the country's GDP. There are 23 million SMEs and private operators per 240 million Americans, or five times more than in Russia.

Russia needs clearly formulated state programmes for SME assistance, such as in the US or Britain. In the United States, the Small Business Administration was set up in 1953, and Britain intends to facilitate the opening of at least 2,000 small businesses each day. They don't mind that a comparable number of SMEs close down at the same time.

The main thing for them is the speed of opening new businesses, which adds an element of competition and hence efficiency. Small businesses employ 36pc of Britain's workforce.

Russia needs more than an administrative reform to attain a comparable result. The authorities and business should also join forces to set up an effective mechanism for SME support and protection, just as in many other countries, not all of which are industrialised.

Small businesses in India work according to the rules of fair competition, without privileges and shadow agreements, which is most likely why there are so many small businesses there. Local experts don't think there are many of them, and Indian state policy is focused on SME support and assistance. Small businesses enjoy state support from the day of their registration.

Has anything improved in Russia?

I wouldn't say that everything is bad for Russia's small and medium-sized businesses. Statistics show that small businesses started growing in the past few years, by 5pc annually, which is good for starters. But they can grow faster.

We now have a government commission on SMEs, whose decisions are binding on all sides. It held its first meeting to outline emergency measures, notably the procedure for inspecting SMEs, the financial parameters of SMEs, and the procedure for making decisions on businesses.

I think these crucial bills can be coordinated and approved within six months, and we will enjoy the first results in a year.

In two or three years, we will see the delayed effect of the changes. -


Shadow companies are distorting the figures


Officially, small businesses account for 13pc of Russia's GDP. Will this figure grow? Experts are divided. Analysts from the Aton investment company believe that the share of SMEs in Russia's GDP will double within four to five years. They hope that the simplification of regulation mechanisms will encourage SMEs to increasingly operate according to the rules.

Over the past year, SMEs' contribution to GDP went up from 9pc to 13pc. But they can do more, Aton analysts say, because a considerable part of Russian companies are still in the shadows.

The main obstacle to the development of SMEs is lack of funds, and therefore the banking reform planned by the Russian government, which provides for setting up independent credit bureaus, should spur SMEs.

However, not all experts share the optimism of Aton analysts.

Andrei Kolesnikov, director of the SME centre at the Higher School of International Business under the Russian government, said as much as 50pc of SMEs are operating semi-officially, just as in the past.

"Every private operator has at least four companies for risk hedging, three of which exist only on paper. If tax agencies put pressure on such a businessman and close his account, he will quickly transfer the money to the account of another of his firms," the expert said.

"The situation in the SME sector will improve only when the state creates conditions that encourage legal operation. So far, corruption has been rampant in Russia.

"Although the tax burden has been alleviated, outlays are still high, with spending on accounting eating up half of a small business's profits. Who would become legal in this situation?"


Breaking down the barriers that are hindering development

The government has been given a two-month deadline to submit to the State Duma draft federal laws enhancing the protection given to companies and individual businessmen during inspections; government agencies will only be able to conduct scheduled inspections, including various types of license control, of a company or individual businessman once every three years. The limit does not apply to tax inspections.

The President's decree says that unscheduled inspections of small and medium companies should be permitted only to reveal direct threats to life or health, and only with the approval of the regional prosecutor's office. Registering a business will become primarily a notification-based procedure; the number of permits needed to conduct business is to be reduced, and compulsory certification should be replaced in most cases by a manufacturer's declaration of the quality of the goods produced.

The decree provides for mandatory liability insurance, or provision of financial guarantees instead of licensing separate activities; control over the work of Interior Ministry employees will be tightened, and they will no longer have the right to write protocols on administrative transgressions in business.

To streamline the activities of federal and regional agencies in this sphere, plenipotentiary presidential envoys in the federal districts have been instructed to establish regional councils to promote small and medium business, which will include members of the business community.

Federal executive bodies will also set up consultative and coordination committees, including businesspeople and their public associations, to address questions which affect the interests of small and medium companies.


`We are surrounded by a spiked fence of red tape.To open a restaurant in Moscow, you need to collect 254 signatures from officials, including repeat signatures'


`I view this as a war between bureaucrats and business, with traps and pitfalls everywhere... you have to pay everyone at each step'