A global player presents his vision to the world 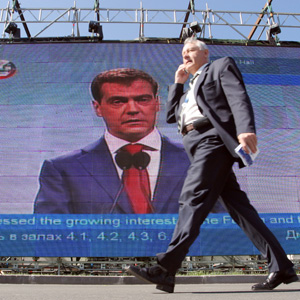 Question one: will Dmitry Medvedev acquire a political face of his own, and a political weight that matches the post of Russian President, considering that he was elected with massive support from his predecessor, Vladimir Putin, who remains in power as Prime Minister? Question two: is Russia changing its political course?

It all started with a visit to Germany. The perception of Medvedev's first visit to the West was coloured by old beliefs: he was expected to take a more "liberal" stand, to make conciliatory gestures to the West and distance himself from Putin's policies.

Medvedev surprised them all: he confirmed Russia's European and democratic identity and proposed to conclude a binding European security treaty to which Euro-Atlantic organisations would be parties.

Yet he is really talking of a regional pact based on the principles of the UN Charter.

The aim of such an agreement would be to determine the significance of military force as a factor in relations within the Euro-Atlantic community.
Medvedev's ambitious plan has not come from nowhere. America's geopolitical singlemindedness worries not only Russia but also Europe, and the failure of attempts to rush Ukraine and Georgia into Nato has changed the fabric of Atlantic solidarity. The idea of a European security treaty will enable Russia to broaden the agenda of the first round of talks with the EU on the new partnership and cooperation agreement, due to be held in Khanty-Mansiysk at the end of June.

Medvedev's speech at the St Petersburg Economic Forum contained even more surprises. He lashed out against the global economic and financial order, called the US claim to world leadership "untenable", while staking out a new global role for Russia (turning Moscow into a world financial centre and the rouble into a regional reserve currency).

Until recently conventional wisdom in the West had it that, for the Russian leaders at least, liberal domestic policies should go hand-in-hand with a more pro-Western foreign policy. Medvedev indicated that although he has an inclination for liberal values at home, he would be a staunch defender of Russian interests in the world. The illusion of a tough Putin, who does not like the West, being replaced by a soft Medvedev, thought to have a sneaking sympathy for the West, has been shattered. Medvedev's speeches in Berlin and St Petersburg set a new framework for relations between Russia and the West. Whoever becomes the next US President can hardly expect Russia to accept American desire for world hegemony.

At St Petersburg the new President unveiled a new course in domestic policy. At least that was how many perceived it. Strictly speaking, though, unveiling is a misnomer. Medvedev has long been clear about his plans for domestic policy. He first outlined the course during his presidential campaign, when he explained an economic policy based on four Is (institutions, infrastructure, innovation, investments) and set seven main tasks: ensuring respect for the law, cutting red tape, reducing the tax burden, turning the rouble into a regional reserve currency, modernising the transport and energy infrastructure, laying the groundwork for a national innovation system, and implementing a robust social development programme.

The St Petersburg forum focused on the role of private business in the new economic policy, a key element of which says that the state will not seek a greater role in the economy. Government interference in the economy is to be rationalised, its writ being narrowed by slashing the number of enterprises listed as strategic. State-owned companies will be made more market-oriented by replacing government-appointed bureaucrats with independent directors from the private sector.

This course is combined with a new interest in the private sector and a readiness to address its concerns: a law on self-regulating organisations will abolish licensing in many sectors, small businesses will no longer be badgered by endless inspections, and the public prosecutor's office will address the needs of private businessmen by setting up consultative councils representing small and medium-sized enterprises. Another core element of the new domestic policy is a systematic campaign against corruption, which today threatens not only economic growth but the viability of the state. Another sign of change is the new attention being paid to the hitherto neglected areas of the environment, public health and quality of life.

In Russia, Medvedev's foreign policy debut is thought to have been a success. In Berlin and St Petersburg he showed that he is acquiring political identity without breaking with his predecessor's course. Medvedev is beginning to carry his weight as President of Russia. Arguably, his further progress in this direction would depend on how he handles another key, though less obvious, task: "to build bridges" with business, the middle class, the structures of civil society and, perhaps, help the West to accept the Russia that has emerged under Putin.

There are grounds for cautious optimism. First, Medvedev has got his priorities right: it is impossible for Russia to move forward without solving the tasks he has identified. Second, continuity lends strength to this political course. It is also important that the new President continues and builds on his predecessor's work (and the latter, in turn, supports his successor's initiatives). But perhaps most significant is the fact that Medvedev's theses were elaborated at the St Petersburg Economic Forum by First Vice-Premier Igor Shuvalov. That means that there is political consensus in the leadership, and that the plans will be implemented by an effective and united team.

Also, the new course is marked by consistency and a comprehensive approach. The projects and practical steps in foreign and domestic policy dovetail neatly. Ideas are being fleshed out and slogans turned into decisions. This shows that the Russian leadership takes the proposed goals seriously. The healthy pragmatism of the new course is also to be welcomed: neither the state nor the market are perceived as ends in themselves, but as instruments geared to the task of development. The same for values. The liberal and conservative approaches are judged primarily in terms of solving concrete tasks. New liberal approaches in economic policy are combined with a commitment to conservatism in social policy.

The setting of long-term goals is moderated by realistic thinking. Russia's main problems were summed up at the St Petersburg Economic Forum in a candid and exhaustive way: a national mentality obsessed with catching up (not a way to become a leader), the energy trap (abundance of resources creates one of the most energy-intensive economies), a laggard's habits (shortage of skilled labour), an unhealthy way of life, and the instinct of the state to dominate (an instinct which has many supporters). The fact that political planners can be realistic about the situation is a good sign.

The course will be seriously tested not only by Russian realities, but also by the realities of world politics. Not all Russia's problems are strictly internal. We have yet to see how Europe responds to the new Russian proposals and the outcome of the US presidential elections. But what is beyond dispute is that the new Russia is emerging as a global player. -