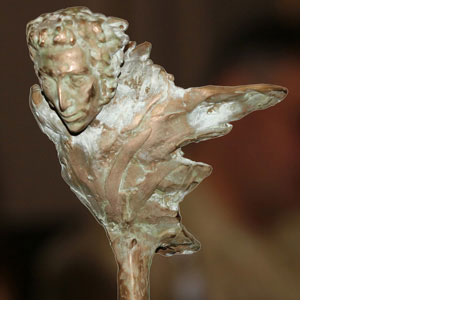 It was all the idea of a London literary group called Master Class headed by Oleg Borushko. Russian poets living abroad are invited to complete a verse from Pushkin, invariably connected with Britain. Competing in the 2008 final were 89 poets and writers from 42 countries.

The 2008 programme opened with a reception at the Russian Embassy in London, where Borushko introduced the event with:
The First Contest of Russian poets abroad was held in a small theatre on the southern bank of the Thames. The finalists came from two countries - Britain and the United States.

Three days ago it was announced that one of the questions included in the Russian exam by the British Examination Board Edexcel was: "What is Pushkin in Britain?" From now on every British student who takes an A-level in Russian language and literature has to know what "Pushkin in Britain" is.

The highlights of the festival were the sixth international poetry contest and the second international short story contest. The audience, consisting not just of Russian speakers (English translations were displayed on a screen), gathered at St Giles-in-the-Fields Church in Covent Garden to enjoy the works of the finalists and to vote for the King/Queen of Poets and Writers.

The competing poets were invited to complete Pushkin's verse "London called for your attention. Your gaze...". The prose writers were to write a story following the plan of Pushkin's unfinished novel: "A widow. An Englishman. A meeting. Gamblers. A policeman. The conclusion." The best entries won a bronze statuette of Pushkin and a cash prize. A book of the finalists' poetry and prose with English translations was published in time for the festival.

This year's festival featured some new events, including the exhibition "Pushkin and Western Europe" at Pushkin House, prepared by the State Pushkin Museum and devoted to the European theme in the great poet's work; a round table of British and Russian Pushkin scholars at a prestigious London club; and a film screening and lecture on The Captain's Daughter (directed by Yury Tarich, 1928).
The festival's organiser Oleg Borushko introduced a new project, "Pushkin in Britain, Shakespeare in Moscow: Two Great Poet Avenues". -

It's a festival of Russian poetry and culture. But the Times was for the first time our informational partner. The British take part in the "Pushkin and Britain" round table, which is a novel event. I have always wanted to add a scholarly element to the programme. Speakers from Russia included academician Natalya Mikhailova, deputy director of the Pushkin Museum, and Yekaterina Geniyeva, director of the Foreign Literature Library in Moscow. From the British side there were the noted Pushkin scholars Robert Chandler, Anthony Wood, Stanley Mitchell and Michael Busker. The Russian-British round table on Pushkin will become a permanent feature of the festival.