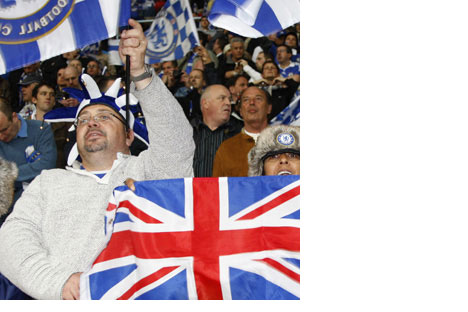 In mid-May Moscow's numerous souvenir stalls suddenly ran out of their stocks of traditional Russian matryoshka dolls. They were swept off the shelves by a 40,000-strong army of British football fans.

The Russian authorities had allowed the fans to come to Moscow without visas to watch the Champions League final between Chelsea and Manchester United. The British presence in the streets of the Russian capital was impossible to miss.

Thus football provided an atmosphere for easing tensions between Russia and Britain. Will it last? It is hard to recall now how promising the partnership between Moscow and London looked at the beginning of Vladimir Putin's presidency. Tony Blair was the first Western leader to meet Putin, and Putin became the first Russian head of state to officially visit Britain since 1874.

A political row broke out after the death of Alexander Litvinenko in 2006. Although passions have subsided since then, Russian public opinion still sees Litvinenko's murder as part of a large-scale provocation targeted at Russia. London apparently holds the opposite view. But allowing these different perspectives to determine the relations between Russia and Britain would mean sliding into a murky world of paranoia.

Gordon Brown and President Medvedev are both signalling their readiness to restore full cooperation. Most probably their personal meeting will be a success. But good personal chemistry between the two leaders is not enough. They have to give thought to institutional guarantees of progress.

So far continued economic cooperation has prevented further deterioration of relations between the two countries. The agreement to set up a Russian-British oil company, TNK-BP, was signed as early as June 2003 during Putin's visit to London. For a while it made Britain the biggest investor in the Russian economy. True, the cooling of relations, which has also affected TNK-BP, allowed Germany to grab first place. Even so, economic links between Russia and Britain were not frozen and continued to grow, albeit not as fast as with other European Union members.

Russia's rapid economic growth offers new opportunities for cooperation. Russia's GDP in nominal terms increased from $200bn in 1999 to $1.7 trillion. The investment bank Goldman Sachs predicts that in just a few decades Russia will be the biggest economy in Europe, overtaking such giants as Britain, Germany and France. Britain now invests not only in the energy market, but also in the construction, retailing, pharmaceutical and tobacco industries. British investments in Russia have increased by 270pc within a year, to $26bn, according to President Medvedev.

Against the background of business's healthy instincts and interests, political confrontation looks outdated. In addition to strong economic interests, political changes may also play an important part in defusing the crisis. Four factors may contribute to the positive trend. The first is psychological. The change of leaders in both countries makes it possible to restore relations from a clean slate without loss of face on either side.

Second, the forces that have come to power in Russia firmly believe that confrontation with the West is too costly and unreasonable. They hope that common sense will also prevail in Britain.

Recent developments in Russian domestic politics are no less important. By the start of Medvedev's presidency a consensus had been reached within the Russian elites. Consolidation of the elites is the starting point for sustained development of democracy. That should allay, if not completely remove, British concern that the Russian political system is slipping toward authoritarianism.

The fourth and last factor is the end of the civil war in Chechnya, which has removed the tricky question of human rights.

If London and Moscow cannot speak the language of common values, then the key to success must be the language of pragmatism which, like Occam's razor, cuts off irrelevant moralising and politicking. -