Gazprom interests are behind the TNK-BP row 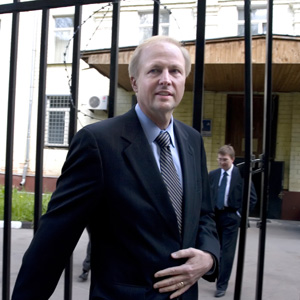 A group of powerful Russian industrial and financial tycoons - Mikhail Fridman, German Khan, Viktor Vekselberg and Len Blavatnik - have been embroiled in a bitter dispute with BP over their TNK-BP joint venture, calling for foreign expansion and less reliance on expensive Western employees.

Industry sources and analysts believe that the dispute at the company was sparked by plans on the part of a state-owned company, most likely Gazprom or Rosneft, to take a controlling stake in the venture.

Gazprom deputy CEO Alexander Medvedev told reporters at a business forum that the gas company would consider investing in TNK-BP only after its shareholders had settled their dispute.

"BP CEO Tony Hayward has come to Russia to settle the ongoing shareholders' conflict in Russian-British oil venture TNK-BP and to hold talks with Gazprom. This clearly means BP wants to cooperate with the energy giant, and therefore that the sale of the Russian shareholding in TNK-BP to Gazprom is only a matter of time," says the financial newspaper Vedomosti. A series of legal probes against TNK-BP in recent months has prompted speculation that Gazprom is moving to acquire part of BP's stake, adds the newspaper.

Dmitry Abzalov, an analyst at the Centre for Current Politics think tank, said: "BP has decided to formulate as clearly as possible its stance regarding Gazprom so as to encourage talks with the gas monopoly and strengthen the positions of British shareholders in TNK-BP in the information war between the British and Russian owners."

Market players say the Russian stake in the joint venture will be sold by year's end. "The Russian owners will try to sell their stake at as high a price as possible, but Gazprom does not like squandering funds when it can avoid doing so," Abzalov observed. "Considering the growing investment spending of Gazprom and [its oil unit] Gazprom Neft, the monopoly will do its best to undercut the price." But, the analyst claimed, this is not a repetition of the Yukos affair, and that the deal will be most likely made in a civilised manner. "A second Yukos affair would be too complicated and energy-intensive, undermining trust in Gazprom and casting a shadow on President Medvedev," Abzalov said.

As Russian observers note, since Gazprom is unlikely to pay as much for the Russian stake in TNK-BP as the owners want, certain privileges could be offered to the Russian shareholders. Pressure is being put also on the British partners. The recent summons of TNK-BP chief Robert Dudley to prosecutors and the Interior Ministry has been viewed as an attempt to weaken the British partners' stance. Dudley was called as a witness in the tax avoidance case opened against Slavneft, 50pc owned by TNK-BP.

The Interior Ministry said last month that it was investigating a former TNK executive on charges of failing to pay nearly $1bn in taxes from 2001 to 2003. Interfax news agency reported that the suspect was Simon Kukes, who now heads the Samara Nafta company. -