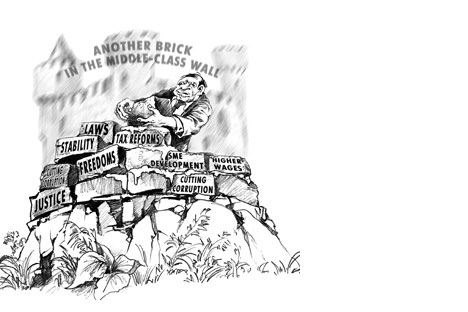 It used to be thought that Russia had no middle class. Today, after years of booming economy, its existence can no longer be doubted.

But in reality, the groups referred to as the middle class do not meet the standard criteria of social science. The middle class in Russia is not homogeneous, but recruited from very different strata; unifying traits are almost non-existent, except for a concern for stability and out-of-control consumerism. The first signs of readiness for public action are emerging in Russia, but they are sporadic. Max Weber's appeals to the "noble spirit" of the privileged status classes will not evoke much response in modern Russia - charity is in its infancy.

What Russia has is not a middle class but two middle strata. One consists of people who describe themselves as middle class in sociological polls, but who in reality do not belong to it. What middle class can one talk of if only 6pc of those polled by the Russian Academy of Sciences' Institute of Sociology last year have bank accounts, and a third have no savings at all? By definition, the middle class cannot live from one salary to the next.

People in this category are mostly university-educated professionals who belonged to the Soviet middle class - doctors, teachers and engineers. Their incomes barely allow them to make ends meet, and they need loans to buy household appliances, which is obviously below the European standards. They cannot even think of buying their own home, even with a mortgage.

The second strata are the well paid who can afford a mortgage, and take loans for the purchase of medium-priced cars. They are the most successful professionals: medium-level managers, a proportion of small businessmen, doctors with a solid private practice, teachers from the most prestigious private schools, and well-paid government employees (as well as their corrupt colleagues at middle level - top bribe-takers belong to the wealthy).

In terms of income, they are indeed comparable to the European middle class, but they do not have any common goals. For the most part, they are characterised by individualism and interest in their own success. They have none of the solid horizontal links typical of civil society. They are in the grip of consumerism, and are preoccupied with keeping up with their peers. Therefore, objectively we can talk only about the middle strata - however they identify themselves.

Moreover, people from the first middle strata model themselves on their more successful peers, who in turn follow the behaviour and consumption habits of the Western middle class. But if the second middle strata can afford a Western lifestyle, the gap between the two Russian strata is too big, creating a potential source of social tension.

The Russian middle strata are enthusiastic supporters of stability. Most of them want living standards in Russia to be the same as in Europe. They do not want to live in the EU, even in the long term. They see Russia as an independent global centre of influence, which should maintain good relations with Europe (up to and including visa-free travel), but no more than that.

But this description of the Russian middle strata does not mean they are totally devoid of interest in public life or anything other than consumption. On the contrary, they have recently been increasingly active on the social and political scene. They are becoming involved in public movements - from car owners protesting violation of their rights to a volunteer charity movement to help individuals suffering from a particular illness. There are, then, some signs of the emerging goal-oriented middle class in Russia, though it will be a lengthy process.

This process will develop as the Russian economy continues to grow, memories of the instability of the 1990s fade, and more and more groups in the first middle strata reach the level of their more successful countrymen. But any socio-economic upheaval or growth of popular discontent could slow down the process substantially. -