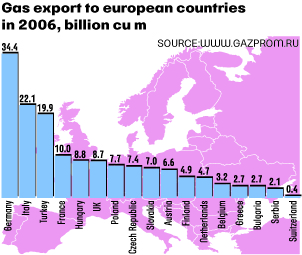 And he welcomed the attendance of businessmen at the third conference of the Russia/EU Energy Dialogue in Berlin.

The conference was held barely a month ahead of the Russia/EU Summit in Khanty-Mansiysk, West Siberia. The summit is expected to give the green light to a new partnership and cooperation agreement (PCA), and approve a rewriting of the rules of the energy game.

The Berlin conference once again showed that the EU Energy Charter, notably its third package, remains the biggest obstacle to relations between Europe and Russia. The Russian gas community insists the new PCA should formalise long-term forecasting of energy demand and include a definition of the legal mechanism for mutual investments, and criteria for selecting projects.

The Russian delegates blamed Brussels for constantly changing the rules of the game on the energy market, endangering European energy security. Valery Yazev, Russian Gas Society president, set the tone. The European energy market, he said, was "distorted, overregulated and politicised". The lion's share of revenue ends up in the purses of importing countries in the form of transit duties and taxes, hindering the development of new deposits.

Europe is gradually losing its attraction for Russia, which can redirect its supplies to energy-hungry markets in the Asia Pacific region.

The Russians reserved their greatest criticism for the third energy package. It would limit foreign investment in European energy generation facilities and split the so-called vertically integrated corporations into separate producing and distributing operations.

The European Commission has forced the termination of long-term gas supply contracts between major European corporations and their consumers. The Netherland's Gasunie has been split into NV Nederlandse Gasunie and Gasunie Trade & Supply BV (currently GasTerra).

European bureaucrats have now set their sights on foreign gas corporations, which could directly affect Russia's Gazprom. It has invested heavily in the construction of gas pipelines and underground gas storage tanks in Germany through Wingas, its joint venture with Germany's Wintershall. Gazprom's long-term contracts with E.ON Ruhrgas, Eni and Gaz de France could also be under threat.

Alexander Shokhin, head of the Russian Union of Industrialists and Entrepreneurs (RUIE), said the latest amendments to legislation had greatly improved Russia's investment environment and called on Brussels to reciprocate. He said Russian business leaders advocated the free movement of capital.

Is a compromise possible while the EU tries to stop Russian companies getting a foothold on European markets, and Russian companies threaten to stop supplying Europe? Shokhin suggested a solution could lie in the integration of multinational energy corporations through asset swaps and access to projects.

Russia is not without allies in its energy dialogue with Europe. Domenico Dispenza, director of Eni Trading & Shipping SpA and president of Eurogas, a non-profit organisation comprising 44 members from 24 countries, said Europe should seriously think about becoming a more attractive market for Russian energy suppliers.

Rainer Seele, chairman of Wingas GmbH, said Germany could initiate a new dialogue between the EU and Russia, covering not only oil and gas supplies, but also foreign policy and security issues.

Business interests are the underlying foundation of our relationships, said Konstantin Kosachev, which means existing problems between Russia and the EU would only be resolved at meetings attended by the business community.

The community would add pragmatism, said Kosachev, and pragmatism is one thing the Russia-EU relations, burdened with political considerations, lack.

Economic ties keep Russia and Europe together, but they still need to find a path for mutually beneficial coexistence. It is this issue the Khanty-Mansiysk summit, on June 26 and 27, will address. -