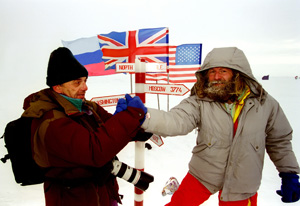 In late May, Greenland played host to the Arctic conference of Russian, American, Canadian, Danish, and Norwegian foreign ministers. The diplomats agreed in a joint declaration that the UN Law of the Sea Convention would be the legal foundation for regulating relations in the region. Experts doubt that any of the five countries will be able to scientifically substantiate their claims to underwater ridges in the Arctic Ocean, which are at the center of the debate.

Russian Foreign Minister Sergei Lavrov explained why the Russian flag was planted at the seabed beneath the North Pole last August. After this Russian expedition, Canada, Denmark, Norway and the United States started talking openly about their claims to the region. Lavrov compared the presence of the Russian flag to the placement of the U.S. flag on the moon in the 1960s - a symbol of scientific achievement rather than a political, territorial claim. The minister recalled the Sea of the Law Convention, which provides, among other things, for the delineation of the continental shelf. Lev Merklin, head of the Seismic Stratigraphic Laboratory at the Russian Academy of Sciences Institute of Ocean Studies, said: "Many publications are reporting huge resources in the Russia-claimed Arctic zone. We have said more than once that such statements are groundless. The potential mineral resources of the Arctic shelf are already within the limits of Russia's 200-mile zone. But there is practically nothing in the Arctic's deeper waters to which Russia could extend its economic zone under the Law of the Sea Convention."

The expert noted that only part of the continental slope in the East Siberian and the Chukchi Seas has oil and gas. This assumption is based on the existence of the Prudhoe Bay oil deposit on the Alaskan shelf.

Merklin emphasized that extracting mineral resources is difficult enough on the Arctic's shores, let alone in deeper waters, and that, for Russia, this is a long-term project that will probably not be realized for at least a hundred years.

Moreover, the expert believes that the world community is not likely to give one country a monopoly on what may belong to others. "Otherwise, the states which declare their interests in the region may come into conflict instead of cooperating with each other," he said. He believes that ratification of the Convention on the Law of the Sea by the United States would be the best possible alternative to the furor caused by Russia's flag planting.

"Today, instead of fighting for oil and gas, we should concentrate on international cooperation in the Arctic, and ensure its environmentally safe development. None of the coastal countries can cope with this task single-handedly," he said. -