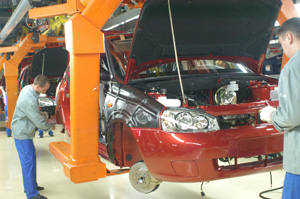 Many experts question the wisdom of making long-term investments in Russia. As my company has and continues to do this, I would like to use the opportunity to explain why we do so.

Today, Russia is one of the most promising, and fastest growing, consumer markets in the world. The country has a highly educated and skilled workforce capable of working with hi-tech equipment to produce internationally competitive products.

Within Russia, the Samara region is one of the most rapidly developing economic entities, with enormous scientific, technical and industrial potential. One example of the region's success is the Samara Metallurgical Factory (in which my company has invested) - the largest producer of aluminum components in all of Europe (in fact, the factory is responsible for 40% of all aluminum products made in Russia).

Our operations feature vertically integrated production that includes the use of hi-tech alloys, which allow for three additional vectors of manufacturing: pressed, rolled and forged components.

Alcoa's investments in Samara total $373 million (not including the initial purchase of the Samara Metallurgical Factory). This money is directed toward upgrading and improving the factory's infrastructure, installing new equipment and applying the use of the latest technologies in the field.

Our company is implementing new standards of economic and industrial culture in Samara, and is setting new heights of production quality for most of our subsidiaries in the region. We believe that this is having an overall positive effect on the economic development of the entire Samara region.

The metallurgical production cycle has always demanded a large reserve of highly skilled specialists. Over the course of many years, Samara has become home to a large pool of talented experts in the field. In fact, this was one of the primary reasons our company chose to invest in the region, and has been a major contributor to our success here.

The work we have done with locals has been the most rewarding part of our experience in Samara. Getting to know this exuberant and hard working group of people has convinced us that our decision to invest here was the right one.

During the last three years, we have been able to solidify our position in some of the world's most technologically demanding fields: aviation and space component production. This is a market we are very excited about because of its enormous potential for growth.

We hope that our work in Samara has been significant not only to the lives of our workers, but also to the local authorities. Samara's leadership is currently pursuing several very ambitious projects aimed at attracting investments, developing infrastructure and other market institutions and building an innovation-based economy. We believe that Alcoa is taking an active part in these endeavors.

We also believe that our work can serve as an indicator of the attractiveness of both the Samara region and Russia as a whole for foreign investment. We continue to have confidence in Russia's rapid economic development and will continue to invest in its vast industrial potential. By working together with the people here, we can build a better future for all of us.