Our Very Own Dutchman 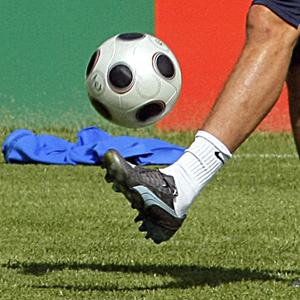 The victories of the Russian national team in the European soccer championship over Greece, Sweden, and consequently over the Netherlands, bringing the team to the semi-finals, was widely celebrated in Russia as a national triumph. The fact that the team's star coach, Guus Hiddink, is essentially a foreigner has been overlooked by the fans, signifying an enormous shift in the Russian society's system of beliefs, now willing to see a foreigner as kin.

Any commentary is needless; it is only possible to state the facts. In the first game of the European championship, our national team demonstrated the worst traits of the national character: we take too long to harness the horses. And in the last game, it showed the best ones, because we ride really fast. Inspiration changes people and transforms the game; clumsy clodhoppers turn into handsome men flying on the

How the traditional Dutch manager, also known as the Dutch coach, managed to achieve such results, is a special question. What buttons he pushed, which feelings he tried to make more poignant, and which unnecessary impulses he stifled. It is clearly obvious, however, that besides his own will and the will of the soccer bosses that hired him, Hiddink not only achieved a coordinated game for his team, but also something bigger in the sphere that is not directly related to soccer.

Let's try to take the side approach to the problem. When asked which team he's rooting for in this championship, one very nice 1960s democrat somewhat sadly replied: for no team in particular; I'm rooting for a beautiful game. "What do you expect of the Russia-Sweden game?" I'm perplexed, he said; on the one hand, I wish success to my country's team, but on the other hand - I'm afraid of their victory. Why is that? Because this victory will not just spur the joy of the sports fans, it will translate into massive pride for our political regime. I did my best to console the nice man from the sixties: nobody will take pride in the political regime, except for maybe the worst of fools. As for an infusion of politics, in sports, just like in alcohol, there will always be adulterants - people rarely take it in pure. But there is also another thought, and it's probably the most significant one.

Grand soccer condenses the fans into an emotional mass, turning them into collectively thinking plankton. It reveals the dark and the light sides in the mass consciousness and subconsciousness. It unites people with the feeling of teamwork. It strictly separates them from the others - those who root for the rival team. And thus soccer participates in shaping a civilization and in the formation of worldviews, albeit on a lower, but extremely important level. And when a national team is at play, all of this multiplies manifold.

If the mass frame of mind is unhealthy and people are greatly concerned for the status of their country, then the team's defeat will inevitably be lived through as national humiliation, as a consequence of a foreign collusion. And a victory will be perceived as obvious proof of our covert superiority, so tragically underestimated in all other areas and spheres of life. If, however, the mass consciousness is not too focused on status, i.e. on the number of feathers, then the situation is very different. Chagrin and joy have their own, independent value; self-flagellation and pride for your team's achievements are in no way connected to the feeling of the collective hostility of the outside world, which we need to break through - or we'll perish.

What poured out on June 18 and continued to exude for two more days, only to be replaced with the happily anxious anticipation of the next game... what if... we're on a winning streak... — is simultaneously beneficial and dangerous. Dangerous - and beneficial. Patriotic energy with a clear after-taste of nationalism continues to boil in the beer-breath-filled bars, movie theaters and pavilions. But this is not ethnic, but state nationalism. We're strong! We're independent! We can do this! Go Russia! Yes, fans are proud - but not of being Russian by blood, but of being Russian by state. Under certain circumstances, state nationalism can also get hysterical and turn inside out. But unlike ethnic nationalism, it can also serve for the common good, slowly transforming into healthy patriotism. The motto of nationalism is: everyone who is not with us is against us. The slogan of patriotism is: everyone who is with us is one of us.

Guus Hiddink is perceived as "one of us." Our own Dutchman, Russian to the core. And this is a colossal shift in the general system of beliefs. Yesterday this environment readily responded to an anti-Georgian call, but today the same environment is willing to see a foreigner as kin. And to look at him with gratefulness, not looking up from below, but the way you look at your neighbor. And this is a light sign of the near-recovery. Not guaranteed, but possible. In the late 1980's our hockey players (and the soccer players, a bit later) first dashed to play for foreign clubs, and this originally evoked rage: they sold their motherland and betrayed their teams... Later the functionaries found the right explanation: the sports legionaries bring Russia into the West, in a way, and support our reputation; go ahead, guys, the best of luck to you. In the early 2000's, they dared to pose a dangerous question: can a foreigner head the national team? Will it offend the feelings of the wide masses of soccer fans? Will it turn into dangerous resentment? Oligarchs offered money to hire a foreign specialist; they kept being held back: don't rush, we're not ready yet. More often, dark-skinned, curly-haired players began appearing in key sports clubs; people got used to the idea that a Spartak or a CSKA team member can be black. And this was yet another step toward the modern organization and structure of our world.

Now, here comes another immunization shot against bitterness. In the last few years, we have been told that the main symbol of Russian unity is Ivan Susanin, who led the Polish soldiers into a swamp. Now everyone applauds a Dutchman who helped give the Swedes a soccer Poltava. Instead of political hysteria, we got a merry sports celebration. Instead of a fear of foreigners — a joint game on the common field. Instead of a Dutch illness - a Russian recovery. What a wonderful recipe.