Foreign immigration in Russia: How to lower tension among nations? 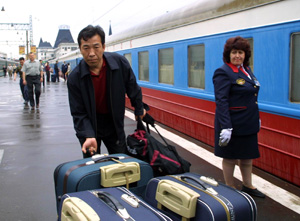 In order to evade the growth of interethnic tension and conflicts between the local population and the migrants in Russia, the authorities should limit the inflow of the foreign non-qualified labour to our country, to toughen the way of their receiving an entry permit and registration, as 55% of respondents identify. Another 26% believe that one should not let migrants to reside in their own concentrated districts in certain cities and areas of Russia ("ethnic ghettoes").

All other variants of the solution are less popular. Thus, 28% of respondents support the idea to toughen the punishment for propagation of the ideas inciting inter-confessional and ethnic hatred, 22% assume that one should forbid the activity of all extremist religious and political organizations. As far as measures like legalization, increase of legal security for migrants, improvement of their living conditions are concerned, no more than 13-14% of respondents mention and support them. 10% favour strict suppression of any non-authorized meetings and demonstrations on the streets.

Russians are more likely to be against the "ethnic ghettoes": the point of view that the authorities should not let migrants to reside in their own concentrated districts in certain cities and areas of Russia, is supported by a much bigger share of respondents than the opinion that such ghettoes are necessary (26% versus 12%).

Respondents with a higher educational level give more attention to such measures, as restriction of inflow to our country of non-qualified labour (starting from 46% in group with incomplete secondary education up to 59% in group with higher and incomplete higher education); toughening the punishment for incitement of ethnic hatred (24% versus 32%); prohibition to create ghettoes (21% versus 27%); increase of legal security of migrants (9% and 18%), at the same time these respondents give a little less values to the improvement of living conditions for the migrants (15% versus 11%).

The idea of creation of places for concentrated residing of migrants is more popular in the group of respondents with high estimation of own financial standing (12-14%) than among respondents with low estimation of the same factor (8%). At the same time, opponents on the "ethnic ghettoes" are a lot more numerous in all these groups (25-29%).

The attitude to migrants is the best in middle-size cities. The share of supporters of increase of legal security for migrants is much higher there than in other types of settlements (23% versus 9-17% in other types of settlements), the same refers to the improvements of their living conditions (18% versus 12-15%). Moreover, supporters of the idea of the restriction of arrival to Russia of foreign non-qualified labour are less numerous in middle-size cities (44 %) than in other types of settlements, especially lower than in Moscow and St.-Petersburg (67%). A more "emotional" attitude that the residents of the two capitals have towards migrants is also expressed in their opinion concerning the ghettoes: the share of supporters of creating ghettoes is higher here than average in the country (16% versus 12 % on the average on the country), the same refers to the share of the ghetto-opponents (33% and 26%).

The initiative All-Russia opinion poll was conducted by VCIOM on May 31- June 1, 2008. 1600 respondents were interviewed in 153 population areas of 46 regions of Russia. The statistical error does not exceed 3.4%.