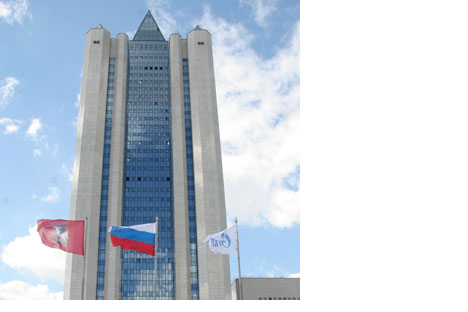 On that basis the Russian state-controlled gas monopoly hopes to become an influential world energy company. This is borne out by the materials prepared for the annual meeting of Gazprom shareholders held on June 27. The meeting was routine, if not dull. And indeed, what can one expect since the price of hydrocarbon resources have skyrocketed for several years, with the current average price in Europe at $400 per 1000 cubic meters. Even the first change of Gazprom's Chairman in many years was something of a formality: First Vice Premier Viktor Zubkov became the Chairman of the company's Board of Directors replacing Dmitry Medvedev who moved from the seat of Vice Premier to that of President in May.
However, for eight years the day-to-day affairs of Gazprom have been run by the company's CEO Alexei Miller. He implied that the company's strategy would still be based on the price for "the blue fuel". The gas company's investment program hinges entirely on this. In 2008, with luck, the investment program may increase from the planned 710 billion rubles ($30.33 billion) to 910 billion rubles ($38.9 billion).
The main investment projects will be the Bovanenkovo and Kharasavei fields on Yamal Peninsula, which the Russian giant is finally starting to develop, and the building of the gas pipeline between Bovanenkovo and Ukhta which will link the fields on the peninsula with the existing network of gas pipelines.
It is heartening that the gas monopoly is planning to increase gas production in 2008, if only by 2.6% to 563 billion cubic meters. The extra gas will go to the domestic market. It will be recalled that Gazprom's fuel production dropped by 1.3% in 2007.
The meeting discussion could not ignore the delicate issue of Russia's middleman role in selling Central Asian gas to Ukraine through which 80% of the sales of Russian gas go to Western Europe. Last spring Uzbekistan, Kazakhstan and Turkmenistan declared that they would themselves supply gas to Gazprom at average European prices (this year Ukraine has been buying Central Asian gas from Gazprom at a much cheaper price, $179.5 per 1000 cubic meters).
Miller told the Gazprom meeting that if agreements with the Central Asian countries are based on the average European price this year, the cost of gas for Ukraine would be more than $400 per 1000 cubic meters. It should be noted that Russian Prime Minister Vladimir Putin, in his talks with Ukrainian Prime Minister Yulia Tymoshenko on June 28, was much more diplomatic. Both agreed European prices for Ukraine should be introduced gradually.
As for other aspects of international cooperation, Miller told the Gazprom meeting that an agreement with Slovenia on building the Southern Stream pipeline (from the Russian Black Sea coast via the Balkans with branches to southern and northern Italy) would be signed shortly. A similar agreement is planned with Austria. (Such agreements have already been signed with other transit countries.
A recent Financial Times list of the biggest companies has Gazprom, with a capitalization of $300 billion, in 4th place after ExxonMobil (U.S.), PetroChina (China) and General Electric (U.S). However, after the meeting Miller said that the Russian gas monopoly was set to gain even greater weight as an energy company in the world. He thinks Gazprom will need 7-10 years to become the world's "number one".
Miller can well afford to make such forecasts as his own contract with the company expires in 2011. A promise to double the group's capitalization within two years would make more sense. But to do that the issue of the group's efficiency must be addressed and the returns on investments must be increased. Today investments are spent much like in Soviet times, on the basis of using up the money.
But this is not how Gazprom management thinks. It believes that the price of hydrocarbons will go up and up. In an interview with the British Financial Times on the eve of the shareholder meeting, Miller said the price of oil next year would hit $250 per barrel (OPEC, for example, does not rule out that oil prices will jump to $150-170 per barrel this summer, but it is aware that the market is a typical "bubble" which may burst at any moment).
Miller told the FT that his company viewed North America as a sphere of its strategic interests and was planning to start supplying liquefied natural gas from the Shtokman field in the Barents Sea to the US and Canada beginning in 2014 (having said that, the West-European market may consume all the fuel from Shtokman). Miller also claims that Gazprom is interested in taking part in the construction of a pipeline in Alaska.
Moreover, Miller says Gazprom is about to strike a major gas deal with Nigeria for the construction of a 4300 km trans-Saharan pipeline that would bring gas to Europe via North Africa. If one looks at the world through rose-colored glasses, one can make bold plans indeed.