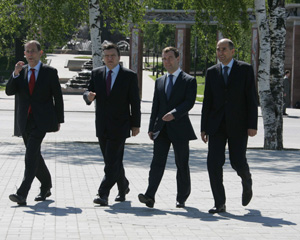 The Russia-EU summit in Khanty-Mansiysk met expectations. First, the parties finally announced the launching of negotiations on a new fundamental document to replace the Partnership and Cooperation Agreement currently in force. They had not managed to do this at the three previous summits due to growing disagreements among countries in many different areas. The disagreements have not disappeared, but the emotional strain subsided, which allowed unblocking the negotiating process.

Second, those who hoped for a symbolic warming due to the change of president in Russia received what they wanted. Dmitriy Medvedev's intonation differed sharply from Vladimir Putin's tone. The new Russian leader is learning to speak in the same manner as the EU whose representatives are skilled in wrapping their extremely tough and unyielding stance in an unbelievably polite verbal wrap. One way or another, the absence of obvious attacks was a positive result. The first round of proper negotiations will take place in Brussels this week.

The dialogue promises to be long and difficult for several reasons.

First of all, the parties' current ideas of not only the content but even the form of the future document are almost diametrically different. Moreover, it is the format of the agreement that threatens to become the main stumbling block, because the form really defines the content in this case.
The European Commission (and it is the commission that conducts negotiations on behalf of the EU) insists on a broad comprehensive document which would regulate in detail all aspects of Russia's collaboration with the EU.

Brussels' interest is plain to see. The European Commission is stuck within the rigid framework of the negotiation mandate, which was approved with great difficulty by the 27 member states. It has no right to depart from it, but at the same time has to pursue the goals set by the member states. Therefore, the European negotiators have very little leeway for compromise and Brussels can achieve its goals solely through multistage bargaining. Therefore, if energy cooperation, visa-free travel procedures, investment rules, noncitizens' rights in the Baltics and other topics are bundled together, they will have greater opportunities.

Russia, on the contrary, is striving at fragmenting the process. Moscow's idea is a compact agreement on basic principles, which can subsequently be supplemented with specific documents in each area. These include visas, transport, space, energy, humanitarian issues, investments and the like, which should be discussed individually also. Moreover, these sector agreements should be concluded as conditions mature, and it is clear that the speed at which they mature may vary.

Incidentally, this scenario looks more promising from the perspective of future ratification, for the framework agreement will have to be confirmed by all member state parliaments after its conclusion. The broader the document the more likely it is that some country will be unhappy with something in it. Meanwhile, a single "nay" will dash the whole process.

Disagreements over the format stem not as much from negotiation stratagems as, above all, from fundamentally different visions of future collaboration. To be more precise: Will the dialogue be held on equal terms, meaning will the parties move toward each other from some starting positions in order to achieve compromise, or was the European format chosen in advance and Russia is fated to act within its framework?

The EU is not a monolithic association; it is a combination of a huge number of different interests. Their balance is maintained by means of endless mutual concessions. Foreign policy is the most problematic area. It is virtually impossible to reach any agreements and make clear-cut decisions on fundamental international issues. Therefore, extending the EU's legal approaches — norms, rules, and economic tactics — to neighboring states is a form of the EU's external expansion. The process has a nonpublic character: Gradual "harmonization" of legislations takes place.

This method showed absolutely fantastic effectiveness until recently. Not only the EU's large-scale enlargement at the beginning of the 20th century (the number of member states was virtually doubled), but also the long line of countries eager to enter the EU attest to this. Incidentally, the Partnership and Cooperation Agreement signed in 1994 and ratified in 1997 was also based on this model. Admittedly, Russia's entry into the EU was never at issue, but the parties agreed back then that Russia needs "europeization" based on EU principles.

A lot has changed since. Moscow states that it has no intention to seek integration with anybody on unequal terms. Moreover, the integration idea is not very popular; the dominating viewpoint is that Russia should remain an autonomous power center and not yield an inch of its sovereign rights.

However, the EU has found itself in a different situation also. The EU's ability to absorb new states, even those going out of their way to achieve this, has reached its limit. Even the Balkans present serious problems not to mention such large countries as Ukraine or Turkey. While Ankara, by inertia, is still being promised hypothetical membership prospects (although it is more and more obvious that this will not happen), Kiev is not being promised even this, ever more so since the failure of the Irish referendum caused yet another internal crisis in the EU and the mere mention of admission of new members causes an allergic reaction in most European capitals.

However, relations with Russia pose a particularly tough dilemma. The integration paradigm of "harmonization" is no longer working, but Brussels does not recognize any other form of relations with its close partners-neighbors. Meanwhile, Moscow would prefer a model reminiscent of EU-US ties. The EU and the United States are not bound by a "strategic" comprehensive treaty. They bargain on each specific issue and each time the European Commission receives an individual mandate for this from the national governments. We have to say that the Americans often manage to gain substantial concessions from their European partners in this format.

It appears that simple solutions simply do not exist and any scenario is fraught with lots of complications. Having said that, even if the parties do not manage to reach agreement on any new document at all, a catastrophe will not happen. Practical cooperation between Russia and the EU is developing actively on the existing legal basis also. Meanwhile, changes in Europe and the world are so rapid that in five-seven years the general agenda and the situation in the international arena may prove to be absolutely different and the discussion of "strategic partnership" will have to start from scratch.