The Doctor Is Deep in Thought 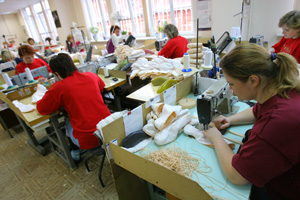 Russia's light industry has to become a part of global industry. Dmitry Medvedev pronounced the sensational words during his recent visit to Ivanovo Region. Light industry has traditionally been the most backward one in this country. According to the Rosstat statistics agency, clothing, textile, and fur production dropped by 0.3% last year, while production of hides, skins, and footwear fell by 0.1%. This fact is even more disappointing because the market for these products is enormous in Russia, about $80 billion and rising by 20% annually. The market exceeds those of household electronics or automobiles. Over two thirds of its money goes to foreigners, including the so-called grey-market dealers as well as to illegal manufacturers.

First, the President promised to render financial assistance in re-equipping light industry's companies. The country is developing new loan programs and increasing its subsidies to cover the interest rates. "We should consider increasing subsidies from one half to two thirds of the rate just like we did in other sectors; that is an absolutely appropriate thing to do," Viktor Khristenko, Minister of Industry and Trade, declared at a recent meeting of the Russian State Council's Presidium.

However, other important decisions have been made as well. The state is planning to boost the development of the industry by implementing nanotechnologies. Russia's textile industry is mainly manufacturing plain fabrics, mostly calicos, for bedclothes. The government intends to launch the manufacture of tissues mixed with synthetic fibers and polyethers, and to produce viscose: garment textiles, in short. Only niche companies that produce overalls or military uniforms manufacture such fabrics at the moment. In fact, domestic light industry is mainly involved in manufacturing those items.

Producing new textiles will boost the development of the clothing industry whose production is slumping because of competition from imports. However, the market is very promising: it comes to $30 billion and expands by 15% annually. Unfortunately, it is entirely in the hands of foreign companies.

To achieve the target, the government intends to create industrial clusters in the Ivanovo, Kostroma, Vologda, and Yaroslavl regions. "The clusters will provide the textile industry with modern engineering, technical, transportation, and social infrastructure and will allow the manufacture of other sorts of products," Dmitry Medvedev said.

Designer centers will appear in those areas as well, the President added. The government is also planning to develop manufacturing flaxen fabrics, as flax is the only raw material for light industry that grows in this country. As far as imports go, the President has instructed customs and law enforcement agencies to combat smuggling, which destroys the industry by damping. According to official statistics, contraband occupies half the market, and market players insist it reaches 70%.

Medvedev said the government was willing to invest 2.5 billion rubles (about $110 million) in the industry. That is a considerable amount. However, if all goes well, light industry has one of the fastest turnovers. It takes three to four months for a product to reach the shelves from conception. Only retail trade has a faster turnover.

Russia does not have a raw material base for the industry. Flax products occupy only five percent of the market at the most and cannot be treated seriously. There is no cotton or synthetic material, there is very little wool and leather; Russia does not manufacture thread, buttons, zippers. or other accessories. This country imports all these items as well as equipment from abroad, which renders Russia poorly competitive against foreign manufacturers who have both raw materials and government support. Imports are getting ever more active. Attracted by high demand, hundreds of new players operating in different price segments arrive in Russia each year. In 2007, imports increased twofold against the previous year. Domestic companies fail to compete primarily due to high production costs.

Thus, the production costs of certain types of fabrics (cotton and polyester) increased by twelve to fifteen percent over the past year. However, such internal factors as rises in cost of transportation, energy, hot water supplies, and constantly increasing wages. "Our expenses went up by 20% last year because of growing tariffs and wages," president of Russian Textiles Alliance Konstantin Volkov says. According to Volkov, the textile industry in Russia may only become cost-effective if average wages are under seven thousand rubles ($300), while the industry's workers earn much more than that even now. The industry's enterprises are short of finances and are not capable of modernizing production, conducting research, of developing properly. The number of people engaged in the industry has dropped from one million to 400,000. Many enterprises are out of business. These are mainly spinning and weaving mills that are not involved in deep processing.

Vertically integrated businesses that control both production and distribution, such as the Russian Textile Alliance, Nordtex, The Volga Textile Company, and Megi are in a better position. However, they are now developing mostly at the expense of distribution. "Some companies claim production in Russia has become completely unprofitable," Konstantin Volkov says. "They aren't closing down their businesses only because their production facilities have been pawned with the banks that give them loans."

Only those enterprises that operate within niches free from competition are preserving their business on purpose. They are primarily those that manufacture overalls and fabrics for the overalls (Chaikovsky Textiles and Vostok Service). Others are trying to master the niche of quality products at prices lower than those of imports (Nordtex and VTK). Those companies that are led by exceptionally charismatic executives who are used to paddling against the stream such as Vladimir Melnikov, head of Gloria Jeans Company, have managed to retain their domestic production. Or like Vladislav Granovsky, head of Vassa & Co ,the founder of a much smaller business than Gloria Jeans that has an ambition of reaching the global level. However, they are exceptions to the rule. The sector would continue to stagnate were it not for new government initiatives. Nevertheless, the initiatives are very general. What are the ways of implementing the new decisions? Also, what moves do the companies expect from the government?

To Sound in Unison

Businesses are positive in their reaction to the government's interest, but they are not overexcited. Entrepreneurs say that although the remedy has not been found yet, the doctor is at least thinking about curing the disease. According to the entrepreneurs, the government's basic idea about forming clusters needs further consideration. Only Ivanovo Region is capable of handling the cluster idea at present because it has enough enterprises, skilled specialists and so on, they say. However, even that is not enough. "Organizing the business according to a cluster concept needs innovative production in the first place," VTK CEO Yevgeny Osokin says. According to Osokin, clusters should be formed within light industry's major companies. Vladimir Melnikov is of the same opinion. "Clusters are an obsolete notion. We ought to be talking of vertically integrated holding companies and of branding as the backbone of any industry. Those companies that know perfectly well what raw materials, energy intensity, design, and distribution mean are capable of calculating new requirements and determining their target buyers. One could build two, three, five factories within a vertically integrated brand. They could manufacture polyester, thread, zippers, and dyes. Just building textile mills alone makes no sense, as they will never be able to compete against Asia in pricing."

There are vertically integrated brands in this country's light industry. The aforementioned Russian Textile, Nordtex, and the Volga Textile Company represent the textile sector; Gloria Jeans, Sela, and Tvoye operate in the sewing sector; while Ralf Ringer is in footwear production. Many of them use outsourcing and have a deep understanding of the industry and the market. Despite poor competition, they have managed to create successful businesses, and some of them are aiming at going global. Vostok Service and Gloria Jeans are among the leaders in the industry; their turnovers reach hundreds of millions of dollars. Such companies are experts in creating new industries. "The government has to decide where to build new facilities, how many of them, and for what purpose. They should consider whether importing thread, buttons, or polyester is most beneficial. They could invite us as well as foreign consultants and devise a substantial business project that will consider everything. Not simply investing more money, but working jointly with the market players. Then there will be good results," Vladimir Melnikov maintains. Without the union, many a good intention of the state may only remain that way.

Even now, it is obvious that government officials are badly informed on industrial issues. The authorities have promised to subsidize those credit rates that get in the way of loan activities. That is certainly topical. However, the subsidization of the interest rate alone is insufficient for the support of the industry. "The businesses need long-term, low-interest money to reequip production in the first place. Expensive short-term credit hampers modernization," Konstantin Volkov says. The problem gets even worse because most enterprises in the industry operate in old shabby buildings. "Our buildings are inexpensive, and we cannot borrow a lot against them. If only the government would give the banks some sort of a signal, that would certainly be a breakthrough for the sector," says Pavel Konkov, Chair of Ivanovo Textile Association's Board of Directors. Fighting against smuggling is another important issue in the government program. This country's government has little experience in achieving this lofty goal. Cooperating with businesses might be useful here. "We all know five or six companies involved in illegal imports operations. If they asked us who they are, we would answer directly," Konstantin Volkov says.

Contraband is directly linked to corrupt practices. "Any district police officer, any firefighter, any sanitary inspector knows the whereabouts of backstreet production of clothing or footwear in their area," Vladimir Melnikov claims. He believes that smuggling may only be blocked by cutting off the channels of distribution, i.e., the free merchandise markets. "Once we cut the number of those markets by at least half, manufacturers will be able to develop normally, because there will be no damping pressure. Investments will flow into the industry. The closure of such markets will be many times more efficient than reducing import duties or taxes," he says. It is indicative that manufacturers are calm about changes in customs tariffs and tax privileges. According to them, before making a move, the government should calculate all the consequences first. "They should simply bring together those smart and talented people who think of their country," Melnikov says.

The businesses are skeptical about reaching the international level. "The industry's main objective is to learn to satisfy its domestic needs. The sector is only covering about ten percent of this country's demand. There is plenty of room for expansion. Thoughts of supplying the world are a bit premature," Konstantin Volkov says.

Will the government be able to go beyond the statements? The government and businesses live "in different dimensions", and very often, they find it difficult to understand each other.

Without a union with businesses, it is only possible to restore light industry through government orders. In fact, Deputy Prime Minister Igor Sechin recently spoke in favor of this tactic. However, supporting government orders means that only textiles for army needs and for the production of coveralls will survive in this country, as it is impossible to manufacture consumer products to government orders. "There can be no government monopoly on consumer goods; otherwise it would mean a return to the Soviet economy," Vladimir Melnikov says.