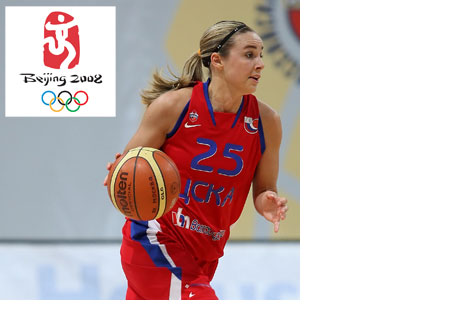 American Becky Hammon, in her CSKA Moscow uniform, will play for Russia's Olympic team in Beijing next month

The number eight is considered auspicious in China. Indeed, the Chinese word for "eight" sounds a lot like the words for "prosper" or "wealth." As such, the summer Olympics in Beijing will begin on August 8, 2008, at precisely 8:08:08 pm.

Whether such numerology will help the home team is debatable. Yet, it should certainly not be quickly discounted; in Olympic competition, the margin between winners and losers is often so slim that even superstition can be a factor. And so, rebounding this spring from impressive sporting victories in hockey, soccer and tennis, Russian athletes have every reason to knock on wood, spit thrice and don lucky socks.

After all, glory is fleeting and good fortune does not last forever.
That said, Vyacheslav Fetisov - three-time Stanley Cup winner, two-time Olympic gold medalist, and current head of the Federal Agency for Sport and Physical Culture - is optimistic. The 2008 Olympics, he said, will be an unprecedented trial for Russian sport. These are the first Olympic games when almost none of the Russian athletes were trained under the old Soviet system. Also, unlike athletes in the chaotic 1990s, who were battered about by uncertainty (finally competing as a "Unified Team" in Barcelona in 1992), these competitors are well prepared.

"They have everything they need," Fetisov said. "They travel to all sorts of foreign competitions, and do their training wherever and however they like. They have excellent technical support. In short, the only thing they need is success. For the last few years, state financing of sport has grown not by a few percentage points, but has multiplied. And there is no other country in the world where Olympic champions get as generous premiums as in Russia - about 200,000 euros, not including expensive apartments, prestigious cars and other substantial gifts. So, it seems the only thing left is for them to win."

This year's team will also include two athletes from the U.S.: J.R. Holden of Pittsburgh, Pa. and Becky Hammon of Rapid City, S.D., who will play for the Russian mens' and womens' basketball teams, respectively. Holden caused a stir in 2003 when he became a naturalized Russian citizen and joined the national team. He has played professionally for CSKA Moscow ever since. Hammon was a new addition to the Russian squad, taking on Russian citizenship to play on the team earlier this year.

What about the advantage of competing at home?

"A lot of people are talking about the heat in Beijing, about support from the home crowd," Fetisov continued, "But when and where has it ever been easy for us Russians? Perhaps only in Moscow in 1980. So everything depends on the character of the athlete. If the new generation has it, then we will be the leaders. If they falter... Well, no, I am counting on success."
If history is any guide, then Fetisov, and Russia's athletes, are on solid ground. At the most recent summer Olympics in Athens (where heat was also a great concern), Russia was second in overall medals. The US was first and China was third. One might even hope that Russia could rise to the top of this ranking for the first time since post-Soviet Russia has been going it alone as an Olympic team.

But this does not seem very likely, at least according to Vitaly Smirnov, who for many years headed the Russian National Olympic Committee and who now is its honorary president.

"I don't think we should expect any fundamental changes in Beijing," Smirnov said. "The US team is extremely strong. And if, as in Athens, the Americans win 14-17 golds in the disciplines where they are traditionally strong, then it would be quite difficult to defeat them. The Chinese are strong in basically four events - gymnastics, diving, weightlifting and table tennis - and it would be difficult for them to quickly dominate in others. What is more, home turf is not always helpful: the fans demand victories and athletes' nerves cannot always take that pressure."

Smirnov believes Russia has a unique advantage in these games. "If we speak entirely objectively, then our Russian team is the most well-rounded," Smirnov said. "We aspire to medals in almost every event... we could take first place in 30.

But who are the leading hopefuls for gold in Beijing? World record holder Yelena Isinbayeva is widely expected to repeat her gold in the women's pole vault, and Tatyana Lebedeva is a top contender in both the long jump and triple jump. Yelena Soboleva recently set records in the 800m, 1500m and mile runs.

Synchronised swimming would also seem a strong bet. According to Tatyana Pokrovskaya, the coach: "My girls have never lost to anyone at the Olympics."
Russia's rise as a tennis power, particularly in the women's rankings, has coach Shamil Tarpishev hoping for golds in women's singles and doubles play. "I have especially high hopes for Maria Sharapova," he said. Sharapova was ranked first in the world, Svetlana Kuznetsova was ranked fourth, Anna Chakhvetadze sixth and Elena Dementieva eighth. No country has as many top-ranked women players.

Then there's Russia's strength in the women's marathon. Of the world's 16 fastest runners in 2008, five are Russian, and all but one in their thirties. Galina Bogomolova is the fastest, but Irina Timofeyeva, Svetlana Zakharova, Lyubov Morgunova and Alevtina Biktimirova are close.

Irina Viner is the coach for the rhythmic gymnastics squad. She has no doubts about her team's chances. Her top chargers are widely expected to top the podium.
With the men, there are particularly high hopes in boxing. Alexei Tishchenko won gold in Athens and in the 2005 World Championships. He moved up a weight in 2006 - to lightweight - and is hoping to gain gold in Beijing. But he is far from alone. At the 2007 World Championships, Russia won eight medals, had a boxer in six of the 11 title bouts, and three of them won. Matvei Korobov, who is currently the world champion, seems to be the main golden hope.

Mikhail Mamiashvili, himself an Olympic champion and president of the Wrestling Federation, said confidently: "Our guys will ensure our basic gold reserves in the final days of the games."
And, of course, there are the gymnasts, cyclists, fencers, weight-lifters, pentathletes and basketball players... Leonid Tyagachev, president of the Russian Olympic Committee, cautiously estimated that, in the end, Russia could realistically win 32 gold medals, while some optimists have their eye on 40 (both, interestingly, multiples of eight).

Meanwhile, despite Vyacheslav Fetisov's conclusion that this is the Olympics of the new Russian generation, there are, in fact, some "older generation" athletes in the ranks, at least two of whom are serious medal contenders.

First, there is 2004 shooting gold medalist Mikhail Nestruyev, 39, a lieutenant-colonel in the army. Second is Irina Karavayeva (born 1975), who won gold in Sydney in 2000 on the trampoline. She has won five World titles and four European titles, and consistently attempts exceedingly difficult routines. Karavayeva has sworn to take home the gold in Beijing.